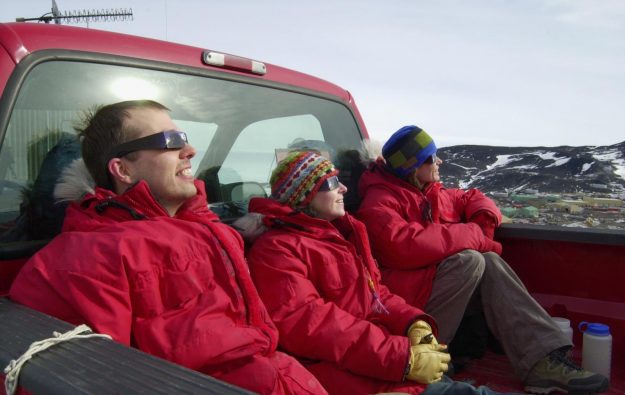 Joseph Harrigan, left, is seen with two other researchers in Antarctica. (NSF)

A lot of federal IT depends on lightning-quick, round-the-clock connectivity. But imagine trying to run top-of-the-line enterprise systems on an 18 megabits per second connection in one of the world’s most remote regions.

It’s what Lockheed Martin’s Joseph Harrigan does on a daily basis.

Harrigan is responsible for managing the Internet connectivity and logistics of the National Science Foundation’s United States Antarctic Program. Harrigan helps a handful of scientists and support staff make the approximately 10,000-mile trip to the icy continent, and maintains Internet connectivity at three research stations there.

So, why do scientists need the Internet in one of the planet’s harshest environments? According to Harrigan, the South Pole is actually one of the best spots on Earth for radio telescopes used in astrophysics studies.

To set up a connection, Harrigan searches for old polar-orbiting satellites that “wobble” directly over the poles, which give scientists a satellite-linked Internet connection for four to six hours a day. Researchers use that link to send large amounts of data to universities for analysis.

“They want to take a look at the data as quickly as they can to see if they notice anything within an area of the sky that’s of interest. During the next [connectivity] period, they focus on that area,” he said.

To communicate with the rest of the globe outside that timeframe, scientists must use 10 Iridium satellite phones at the same time to create a link powerful enough for a 2,400 Kbps connection. That connection is only good enough for some limited email and messaging.

All the while, Harrigan has to follow all of the same security protocols and federal regulations that are mandatory for the rest of the government.

“Probably the most exciting part is figuring out how to creatively meet all the same requirements under the constraints that we have,” Harrigan said.