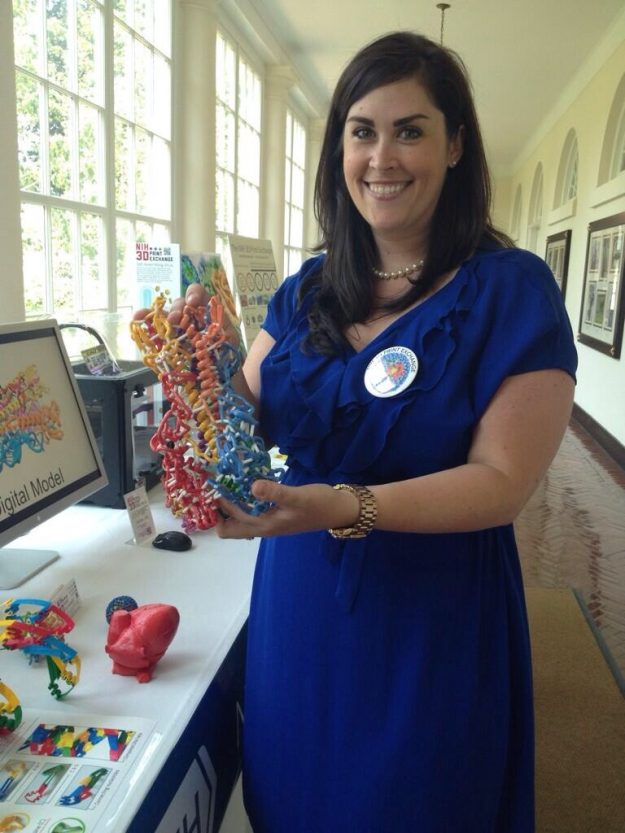 Meghan Coakley poses with a 3-D model at the White House Maker Faire in 2014. (Coakley)

What better way to understand the structure of a protein or virus than to hold a freshly printed, enlarged scientific model of one in your hand?

That’s the logic behind the National Institutes of Health’s 3-D Print Exchange, which hosts an interactive website for the medical and research communities, as well as the public, to share, browse and download 3-D model files of biomedical matter to print on 3-D printers.

The lead of the program, Meghan Coakley, said she fell into the job after earning her doctorate in neuroscience while researching Alzheimer’s disease. While Coakley said her academic background isn’t in data analysis and bioinformatics, she’s had the opportunity to learn code and design for the Web on the fly.

“I did not see myself getting into IT, but that’s sort of where I landed,” Coakley said. “With the field advancing so quickly in scientific computing, we get to do some really new and innovative things.”

Much of her job deals with managing the exchange, curating the submitted models and promoting the program outside of NIH. Last June, the exchange got its biggest buzz as Coakley and her team attended the White House Maker Faire.

“I love this job; it’s really exciting to come into work and do this stuff every day and meet all these people and go to maker fairs,” she said.

To other envious of her position, she said almost jokingly “to go to USAJobs.gov and use the right keywords.” But in reality, she concedes, “I was just sort of lucky.”

But despite the bad rap government gets as a dull place to work, Coakley said there are plenty of jobs like hers that prove otherwise.

“The federal government doesn’t get enough credit for doing things that are innovative and creative,” she said.