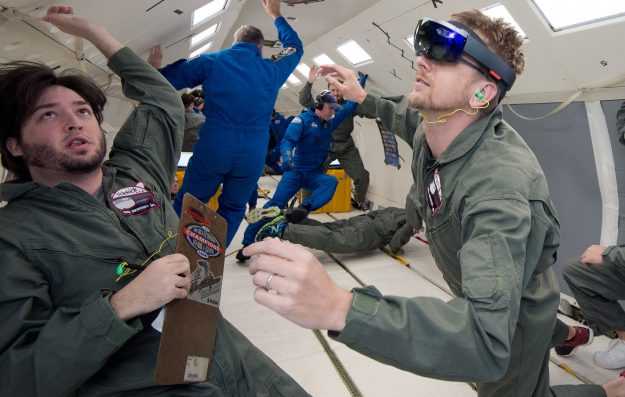 There was a time when Jeff Norris didn’t even know what NASA’s Jet Propulsion Laboratory was.

As a high school student, Norris told his parents he “wanted to go play with the best toys,” which led him to the MIT Media Lab. It was there that someone said he should inquire about JPL.

“My next thought was, ‘Well, I don’t know anything about jet propulsion,’” he said.

Norris’ initial lack of aviation knowledge didn’t stop him from nabbing a job at the lab. Now, he works on transformational technologies that will help astronauts, scientists and researchers examine space in ways they never thought was possible.

One of Norris’ current projects is OnSight, which lets scientists work virtually on Mars by using Microsoft’s wearable holographic computer, HoloLens. The program allows scientists to explore Mars in first person, using 3-D models created from data collected by the Mars Curiosity rover. With this tool, researchers now have a natural, spatial environment to explore a planet from an unprecedented perspective.

“There’s been a lot of research that’s shown how remarkably capable humans are at understanding environments,” Norris said. “When you look at just how amazing humans are at understanding environments, the core inspiration for our work is ‘we want to access those same faculties when a person is trying to explore another planet.”

HoloLens is not the only consumer-driven technology that Norris has used to create something new for the lab. The lab partners with Microsoft's Kinect camera, Oculus VR, Sony and HTC to create everything from new ways to manipulate robotic arms to virtual maintenance tools for astronauts aboard the International Space Station.

“I think it’s critical that NASA and JPL be working on the cutting-edge of technology because we are solving some of the hardest problems in the world,” he said. “To me, there is no better way to solve those problems than to try and use the most advanced technology in the world.”