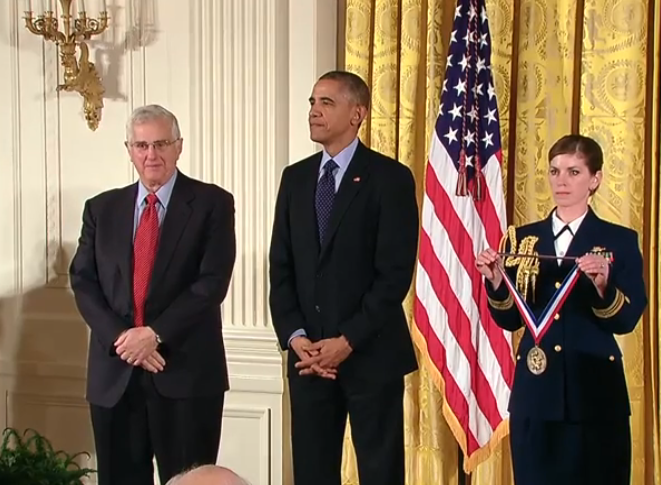 President Barack Obama praised the passion, persistence and “intrinsic hopefulness” of some the nation’s smartest minds Thursday during a ceremony honoring recipients of the National Medal of Science and National Medal of Technology and Innovation.

Eighteen people from various companies, academic institutions and nonprofit organizations were given awards during a ceremony at the White House, where Obama highlighted the ways each recipient’s work “transformed our world.”

“That’s one of the things that makes America exceptional, the sense that we push against limits and that we are not afraid to ask questions,” he said. “When that spirit and that sense of possibility is truly unleashed, then you get the remarkable men and women you see here today.”

The National Medal of Science honors individuals for their outstanding contributions in fields such as biology, physics and math. The National Medal of Technology and Innovation honors “visionary thinkers whose creativity and intellect have made a lasting impact on the United States and its workforce,” Obama said. This year’s winners were announced in October.

Obama used the ceremony to stress the importance of STEM (science, technology, engineering and mathematics) education in the country’s schools, calling for more teachers with backgrounds in science and math. He also announced as part of his Educate to Innovate campaign that 100Kin10, a public-private partnership of more than 200 nonprofit organizations and companies, will invest $29 million toward increasing the number of STEM teachers in classrooms across the country. The partnership has raised more than $80 million to add 100,000 new STEM teachers to classrooms over the next decade.

The president also used the ceremony to plug his forthcoming immigration remarks, saying he would like to have a system that attracts talent to the U.S. rather than sending it away.

“We’re not defined by tribe or bloodlines, we’re defined by a creed [or] idea, and we want that tradition to continue,” Obama said. “But too often, we’re losing talent because — after the enormous investment we make in students and young researchers — we tell them to go home after they graduate. We tell them, take your talents and potential someplace else.”

While the president jokingly admitted to feeling a little self conscious because “everybody in the room is a little smarter” than he is, he praised the recipients for “constant transformation.”

“These folks represent the spirit that has always defined us, one of restless inquiry, searching for the right solution to any problem,” he said. “An inclination to dream big and to tinker and to pull things apart and put them back together again; an insistence on making our dreams come true.”

Below are the winners.

Bruce Alberts, University of California, San Francisco For intellectual leadership and experimental innovation in the field of DNA replication, and for unparalleled dedication to improving science education and promoting science-based public policy.

Robert Axelrod, University of Michigan For interdisciplinary work on the evolution of cooperation, complexity theory, and international security, and for the exploration of how social science models can be used to explain biological phenomena.

May Berenbaum, University of Illinois at Urbana-Champaign For pioneering studies on chemical coevolution and the genetic basis of insect-plant interactions, and for enthusiastic commitment to public engagement that inspires others about the wonders of science.

David Blackwell, University of California, Berkeley (issued posthumously) For fundamental contributions to probability theory, mathematical statistics, information theory, mathematical logic and Blackwell games, which have had a lasting impact on critical endeavors such as drug testing, computer communications and manufacturing.

Alexandre Chorin, University of California, Berkeley For the development of revolutionary methods for realistic fluid-flow simulation, now ubiquitous in the modeling and design of engines, aircraft wings and heart valves, and in the analysis of natural flows.

Thomas Kailath, Stanford University For transformative contributions to the fields of information and system science, for distinctive and sustained mentoring of young scholars, and for translation of scientific ideas into entrepreneurial ventures that have had a significant impact on industry.

Judith Klinman, University of California, Berkeley For her discoveries of fundamental chemical and physical principles underlying enzyme catalysis and her leadership in the community of scientists.

Jerrold Meinwald, Cornell University For applying chemical principles and techniques to studies of plant and insect defense and communication, and for his seminal role in establishing chemical ecology as a core discipline important to agriculture, forestry, medicine and environmental science.

Burton Richter, SLAC National Accelerator Laboratory and Stanford University For pioneering contributions to the development of electron accelerators, including circular and linear colliders, synchrotron light sources, and for discoveries in elementary particle physics and contributions to energy policy.

Sean Solomon, Columbia University For creative approaches and outstanding contributions to understanding the internal structure and evolution of the Earth, the moon and other terrestrial planets, and for his leadership and inspiration of new generations of scientists.

National Medal of Technology and Innovation

Edith M. Flanigen, UOP LLC For innovations in the fields of silicate chemistry, the chemistry of zeolites and molecular sieve materials.

Arthur Levinson, Calico Life Sciences LLC For pioneering contributions to the fields of biotechnology and personalized medicine, leading to the discovery and development of novel therapeutics for the treatment of cancer and other life-threatening diseases.

Cherry Murray, Harvard University School of Engineering and Applied Sciences For contributions to the advancement of devices for telecommunications, the use of light for studying matter, and for leadership in the development of the science, technology, engineering and math workforce in the United States.

Douglas Lowy and John Schiller National Cancer Institute, National Institutes of Health For developing the viruslike particles and related technologies that led to the generation of effective vaccines that specifically targeted HPV and related cancers.

by Billy Mitchell • 19 hours ago
Acquisition