The French have a saying for the type of year 2014 has been for the federal government and its information technology workforce: Plus ça change, plus c’est la même chose — the more things change, the more they stay the same.

Nothing demonstrates that adage more than a comparison of how 2014 began and how it ended. In January, we reported on a Gallup poll that found almost two-thirds of Americans were dissatisfied with the workings of the federal government. That poll was nearly triple the all-time low of 23 percent, set in 2002. Fast-forward to Dec. 9 and the annual workforce survey conducted by the Partnership for Public Service found that overall federal employee satisfaction fell to its lowest levels since the poll launched in 2003.

The lesson? A lot has changed during the past year in government, particularly in government technology, but few are ready to claim victory.

There was at least one double reversing trend to make note of in 2014 — the changing fortunes of the National Security Agency. The year began with the wounds of the 2013 domestic surveillance revelations still raw. Privacy groups continued their angry attacks, calling for nothing short of a total dismantlement of the government’s national security apparatus, and Americans finally began to ask serious questions about the proper balance between civil liberties and security. But by August, the American people seemed to have decided in favor of the NSA. A poll obtained by FedScoop in August conducted by the Chicago Council on Global Affairs found that a super-majority of Americans — 7 out of 10 — thought it was more important for the government to investigate possible terrorist threats, even if that meant minor intrusions on personal privacy.

Speaking of polls: The year also started off with a poll of chief information officers. “The Great Schism: Digital Strategist of Traditional CIO,” released by CIO Magazine, polled 722 CIOs and found that more than a third (37 percent) said they were asked to be innovative but just weren’t sure how to do it. Two-thirds of those CIOs thought it was hard to balance innovation and operational excellence.

Oh, what a difference a year makes. 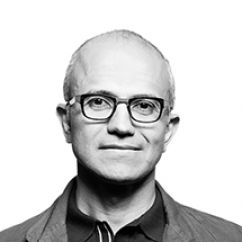 Two industry giants made the first personnel headlines of 2014. Satya Nadella took the helm at Microsoft Corp., replacing Steve Ballmer. Within 10 months of his rise to the top of the world’s largest software company, Nadella was in Washington, D.C., announcing the general availability of Azure Government cloud services.

As Nadella was taking over at Microsoft, Linda Hudson was closing a long and storied career as president and CEO of BAE Systems Inc., where she was known as the so-called “first lady of defense.” In her last major public appearance as CEO, Hudson issued a harsh review of America’s performance in cultivating its future science, technology, engineering and mathematics leadership.

“With U.S. 15-year-olds today ranking 25th in math skills, I fear the likelihood of some day seeing an end to America’s winning record in technological leadership becoming all too possible,” Hudson said during a Jan. 30 farewell speech hosted by the Northern Virginia Technology Council. “Let’s face facts: We have seen America’s science and math report card, and we have fallen off the honor roll.”

One of the first feds to jump ship in 2014 was Casey Coleman, who left her job as General Services Administration CIO for a gig with AT&T Government Solutions, followed by former Coast Guard CIO Rear Adm. Robert E. Day Jr., who retired in April. Sonny Hashmi, who had served as GSA’s deputy CIO since 2011, got the official nod in May to take over for Coleman as CIO.

Change came to the White House as well in 2014. Todd Park, the former U.S. chief technology officer, abruptly left his position in August to return to Silicon Valley, where he is reportedly working on tech recruiting for the government when he’s not being subpoenaed by Congress to testify on the botched rollout of Healthcare.gov.

Steven VanRoekel spent most of 2014 talking about the difficulties of moving agencies to the cloud and sharing his opinions on the need for the Federal IT Acquisition Reform Act, or FITARA, while serving as U.S. CIO. But then Ebola took over national headlines and spurred a major U.S. government response effort. That effort was enough to lure VanRoekel out of the White House to a technology advisory role at the U.S. Agency for International Development.

Following Coleman, Park and VanRoekel was Energy Department CIO Bob Brese, who took an industry role; longtime National Oceanic and Atmospheric Administration CIO Joseph Klimavicz, who took over as CIO at the Justice Department; Robyn East, who retired after three years as Treasury Department CIO, making room for Sanjeev “Sonny” Bhagowalia; and Shawn Kingsberry, who entered the private sector after a stint as the CIO at the Recovery Accountability and Transparency Board and 22 years of federal service.

Meanwhile, U.S. Postal Service Chief Information Security Officer Chuck McGann had been contemplating leaving government for months — a difficult decision made somewhat easier by a massive data breach at the agency. Dr. Karen DeSalvo stepped down in October from her role as the national coordinator for health IT to take over as acting assistant secretary for health in the Department of Health and Human Services.

Joining government in 2014 was Barry West as CIO at the Federal Deposit Insurance Corp. and Ashkan Soltani, who was hired to be the CTO at the Federal Trade Commission despite a very public role working with classified government information stolen by former NSA contractor Edward Snowden. 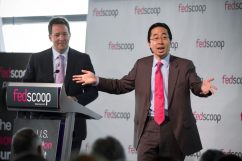 Google and Twitter weren’t about to sit back and watch so much personnel upheaval derail all of the federal government’s innovation efforts. By September, Megan Smith, the former vice president of Google’s innovation platform, Google X, had joined the Obama administration as CTO. Twitter dispatched one of its former lawyers, Alexander Macgillivray, to serve as Smith’s deputy.

Healthcare.gov and Ebola — both unique crises in their own right — pressured the government to bring in additional talent from the private sector. Enter Mikey Dickerson, the former Google engineer who was instrumental in helping to resurrect the flat-lining Healthcare.gov website. Dickerson joined the government in August as the administrator of the U.S. Digital Service and deputy federal CIO. On the Ebola front, the Obama administration met with less success, appointing political operative Ron Klain to serve as the so-called “Ebola czar” — a move that has been widely criticized due to Klain’s lack of emergency management experience.

The Defense Department had a tumultuous year by any measure as far as personnel changes go. Rob Carey provided the first big news of the year in March when he abruptly announced his departure as principle deputy CIO under Teri Takai. Shortly after Carey recovered from what sources said was an unplanned departure from government, he landed at Computer Sciences Corp. as vice president and general manager of the firm’s public sector cybersecurity practice. Just weeks later, Takai was out as well, replaced by acting CIO Terry Halvorsen.

Adm. Michael Rogers took the helm at the NSA, setting a course for a new era at Fort Meade. And in July, a naval officer made headlines when she became the first woman to be promoted to admiral in the Navy’s 239-year history. Adm. Michelle Howard had previously also been the first African-American female officer to command a ship.

By far the biggest upheaval in government during 2014 occurred at the Department of Veterans Affairs. VA Secretary Eric Shinseki resigned under pressure in May after a long ordeal fueled by the waiting list scandal. Obama tapped former Procter and Gamble CEO Robert McDonald to take over VA. By Nov. 10, McDonald had introduced the largest reorganization in VA history, with a primary focus on streamlining VA’s Web presence.

Readers would be hard-pressed to find two areas of the federal IT enterprise more active in 2014 than cloud computing and the tech and policy work of the Federal Communications Commission. FedScoop reporter Greg Otto has been all over these developments, covering the dominance of Amazon Web Services, the growing pains of the Federal Risk and Authorization Management Program (FedRAMP) and the Federal Communications Commission’s heated debates over net neutrality.

Major developments in IT acquisition, workforce issues and, of course, health IT made for a busy year for FedScoop’s Billy Mitchell. According to Mitchell, closing the STEM skills gap dominated workforce issues during 2014, while acquisition and health IT focused on reform and data initiatives.

Congress may have avoided a government shutdown with a last-minute vote Dec. 11, but, as Jake Williams reports, lawmakers left plenty of bills on the table, including the Reforming Federal Procurement of Information Technology Act and the Cybersecurity Information Sharing Act of 2014, sponsored by Sen. Dianne Feinstein, D-Calif. Meanwhile, the White House and the Federal Aviation Administration both experienced a year of tumultuous change in 2014, Williams reports.

The Defense Department, Veterans Affairs and overall federal cybersecurity efforts were other areas of great change and tumult during 2014. Among the most important developments coming out of the Pentagon was the May announcement of a postwar strategic plan by the Defense Information Systems Agency. From mobility to cloud and the ongoing development of the Joint Information Environment, the plan set the stage for much of the conversation and debate about DOD’s IT vision.

The VA would probably like to forget 2014. It was a year of great upheaval at the agency and systemic leadership failures. FedScoop covered the agency’s ups and downs every step of the way during 2014 and discovered that the role of IT was central to many of the agency’s failures.

From a cybersecurity perspective, 2014 was a year characterized by the continued rise of global cyber crime and increasing numbers of data breaches. As the current state of overall cybersecurity seemed to worsen, the Obama administration released the final version of the National Institute of Standards and Technology Framework for Improving Critical Infrastructure Cybersecurity. The problem, of course, remains that the framework is a voluntary set of guidelines that neither the Department of Homeland Security nor NIST can say with any certainty are being widely adopted and followed.

The biggest fall from grace during 2014 goes to the U.S. Patent and Trademark Office‘s once-celebrated teleworking program.