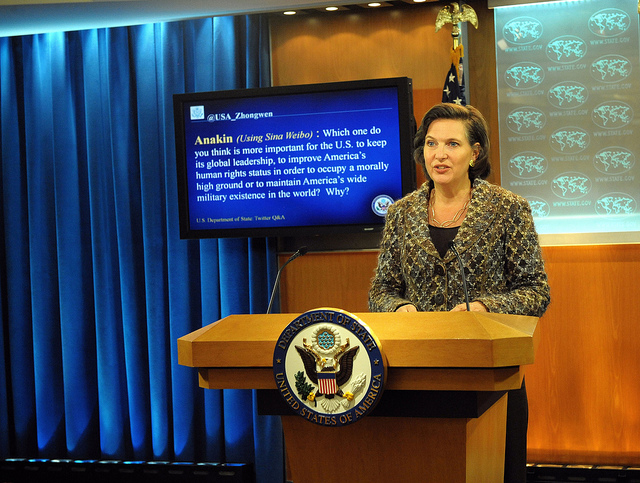 The State Department held its first Twitter Briefing on Friday as part of its 21st Century Statecraft Month.

Department Spokesperson Victoria Nuland took five questions from the department’s official feeds, all of them coming in foreign languages.

“The Secretary is encouraging all of us to use new technology and innovation as a key part of our foreign policy agenda. So here at State and at USAID, we’re adopting new approaches to meet diplomatic and development challenges around the globe,” Nuland said.

“Part of this effort is making sure that we are using full use of digital networks and social technologies to more quickly and directly engage audiences around the world. Throughout this month, we’ll be showcasing some of the ways that the State Department uses new technology and that our diplomats, both in Washington and abroad, make direct contact with citizens. Today, we have more than 193 social media accounts associated with the State Department, and more than 100 of our embassies have Facebook or Twitter accounts, or sometimes both.”

Each Friday, a State Department official will answer questions over Twitter. In Friday’s event, Nuland answered questions that came from around the world in Arabic, Farsi, Chinese, French as well as English.

This week, Secretary of State Senior Advisor for Innovation Alec Ross will participate in a LiveAtState video chat with journalists and bloggers from around the world. The U.S. Embassy in Port-au-Prince, Haiti, will also hold a Twitter question and answer session on the U.S. partnership with the people and the Haiti government two years after the January 2010 earthquake.

by Billy Mitchell • 40 mins ago
Modernization

by Dave Nyczepir • 22 hours ago
Acquisition