More countries than ever are demonstrating high levels of electronic engagement with their citizens, with the United Kingdom topping the ranks of 193 nations in 2016, according to the United Nations’ latest worldwide e-government report.

The United Kingdom’s push to make government services “accessible to the widest possible audience,” using new web technologies, helped propel it past the South Korea, which has led the U.N.’s bi-annual e-government world rankings since 2010. South Korea fell to third place behind Australia in the just-released 2016 rankings.

Rounding out the top-ranked countries, based on a relative index of e-government measures, are Singapore, Finland, Sweden, the Netherlands, New Zealand, Denmark and France. The United States, which ranked seventh in 2014, and second as recently as 2010, slipped to 12th in the latest rankings.

The rankings in the U.N.’s 2016 E-Government Report are part of broader series of assessments by the United Nations’ Department of Economic and Social Affairs, dating back to 2003, aimed at gauging the progress governments are making to support the electronic delivery of public services among the U.N’s 193 member nations. They also reflect the importance U.N. officials see in the central role open and electronic government can play in helping nations achieve long-term, sustainable development goals.

“The U.N. E-Government Survey is not designed to capture e-government development in an absolute sense. Rather, it aims to give an indicative assessment of the diffusion of e-government through a performance rating of national governments relative to one another,” said Vincenzo Aquaro, chief of UNDESA’s e-Government Branch.

More significant than the relative rankings, he said, is the number of countries that have achieved “very high” or “high” scores in the U.N.’s E-Government Development Index, or EGDI. The index reflects a variety of indicators, including online services, information and communication technology development and educational levels — and ultimately how effectively governments use IT to promote civic access and inclusion of its people.

“Notably, in 2016, there are more countries with very high EGDI values — 29 countries in total,” he said, compared to 25 countries in 2014. Joining the list of top performers this year are Slovenia, Lithuania, Switzerland and the United Arab Emirates.

The latest survey reflects growing development of e-government capabilities, “as countries in all regions are increasingly embracing innovation and utilizing new information and communication technologies to deliver services and engage people in decision-making processes,” Aquaro said. 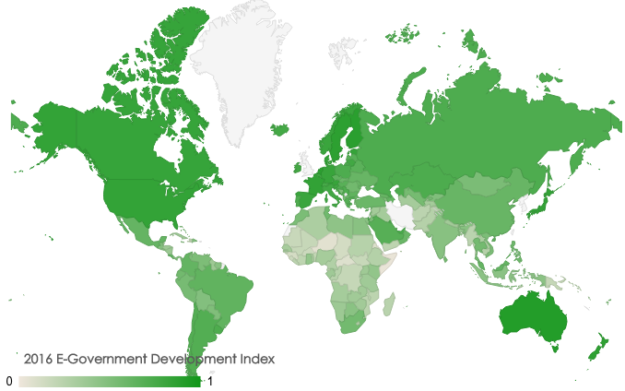 The evolution of technology continues to play a central role driving e-government, say experts that contributed to the report.

“Social media, mobile and data analytics are heavily featured in the 2016 e-government survey because they empower U.N. member states to shift from reaction, to prevention, as they tackle the major societal challenges of our time,” said Julia Glidden, general manager, IBM Global Government Industry, who helped advise the U.N. on the survey. “They are also empowering citizens to play a more central role in the design and delivery of more personalized services.”

Another factor is the continuing growth of mobile phone subscriptions — estimated to have reached 7.1 billion globally in 2015 — and the expectations citizens have to complete services online in countries throughout the world.

Looking at the development of e-government regionally, “Europe continued to lead followed by the Americas, Asia, Oceania and Africa,” Aquaro said.

“The fact that the European Commission’s Digital Agenda forms one of the seven pillars of the Europe 2020 Strategy [for growth], provides clear evidence on how those countries have set the e-government development as one of their national priorities and how much they have been implementing,” he said.

In contrast, “the digital divide between and within Africa and the rest of the world has remained largely unchanged over the past 15 years,” he said. “Except for five countries — Mauritius, Tunisia, South Africa, Morocco and Seychelles — all other African countries are in the lower two tiers of e-government development.”

The U.K.’s climb to the top spot, from eighth place two years ago, when the U.N. last released its rankings, suggests how rapid changes in mobile and web-based technologies, combined with focused policy decisions, can make significant differences in the way governments are able to advance their engagement with the public electronically. The U.N. report noted that today in the U.K., 85 percent of self-assessment tax filings are submitted electronically, and 98 percent of driving tests are now booked online.

IBM’s Glidden, an international expert on open government practices, attributed the U.K.’s ranking in part to “a concerted national strategy, dating back to the establishment of an Office of the e-Envoy [in 1999, and the E-Government Unit in 2004] to integrate back office functions whilst simultaneously driving cross-government institutional coordination.”

Aquaro, however, urged readers of the report not to take away “the wrong impression that who leads the ranking owns always the best solutions. In this so-complex ecosystem, there is not a ‘one-size-fits-all’ solution,” he said.

Commenting on the slippage of the United States in the ranks, he added, “The change in ranking for any country should not reflect on that country alone, since it is a comparative measurement that also reflects the improvement of the other countries,” he said. “The U.S. has been always one of the top countries in our survey, since 2001,” he said.

Visit UNDESA’s website to see an interactive version of the report, providing a multiyear look at how individual countries performed, along with links to previous reports.