But it’s that scheduling module — one of many contained within VA’s main electronic health record system known as the Veterans Integrated System Technology Architecture, or VistA — that VA technology officials have acknowledged is at the heart of a largely dysfunctional system for tracking and scheduling patient activity and ensuring that veterans with urgent medical needs are matched with available medical resources in a timely fashion.

The bill requires VA within 90 days to hire a private organization to conduct a wide-ranging assessment of the systems and business practices behind the agency’s troubled scheduling infrastructure. But here are seven things FedScoop has learned from VA technology officials who recently briefed industry on the challenges facing VA as it plans for a commercial replacement of VistA’s scheduling module.

VistA scheduling is currently a “blue screen roll and scroll” system in which entry level employees tend to rush through the default entries, according to Mike Davies, director of the Access Clinic Administration Program at the Veterans Health Administration. “We knew in the early 2000s that the desired date for appointments was only about 60 percent reliable.”

According to Davies, only about 35,000 of VA’s cadre of 50,000 schedulers nationwide are full-time employees and fill largely low-paid, entry-level positions. Scheduling positions throughout VA also suffer from extremely high turn-over rates.

2. VA can’t measure its own supply

VA employs approximately 125,000 physicians, but because of problems with VistA scheduling the agency does not have accurate knowledge at any given time of what doctors and other medical resources are available. “How many organizations our size would not be able to tell you how many appointment slots those physicians staff?” Davies asked, speaking June 18 at an industry day focused on the replacement system for VistA scheduling. “Zero,” he said. “And because of the design of VistA scheduling…we don’t know that number.”

3. Too many screens, too many schedule types

Being able to count schedule types is important to VA’s ability to track medical trends. But VistA forces schedulers to have multiple screens open to check and make appointments for a growing list of schedule types, what are known throughout VA as grids. The grids are the way VistA scheduling collects data that often ends up getting reported to Congress.

The problem? There’s a different grid for nearly every affliction and a different screen has to be open to access every grid. “So I have one grid for military sexual trauma, one grid for addictions, one grid for general mental health and on and on,” Davies said. “VistA scheduling has evolved to have a proliferation of these grids. It’s a nightmare. It’s a Gordian knot really and it’s highly error-prone.”

4. No-shows are a real problem for VA

Private medical practices in the U.S. average a 5 to 7 percent no-show rate for patients who make appointments. VA’s no-show rate is 13 percent, “which is terrible [and] is in part because of this scheduling system,” according to Davies.

Recall scheduling is disconnected from VistA scheduling, as is the New Enrollee Appointment Request application.

6. Sometimes even printing and mailing appointment reminders is too much for VistA to handle

Many VA medical centers and clinics rely on legacy appointment notification letters, which simply tell the veteran he or she has an appointment at a particular facility. The problem, however, is that VistA spits out the letter using a facility identifier that is “gibberish” and does not translate the clinic name into common language, according to Davies.

Only about one-third of the facilities around the country have entered into a contract with Xerox that translates the clinic identifiers into common language and creates a user-friendly appointment reminder in the format of a postcard with a map to the facility.

7. Patients are disconnected from VistA

VistA also lacks capabilities for patient self-scheduling and cannot capture a patient’s preferences for how they would like to be contacted by VA. 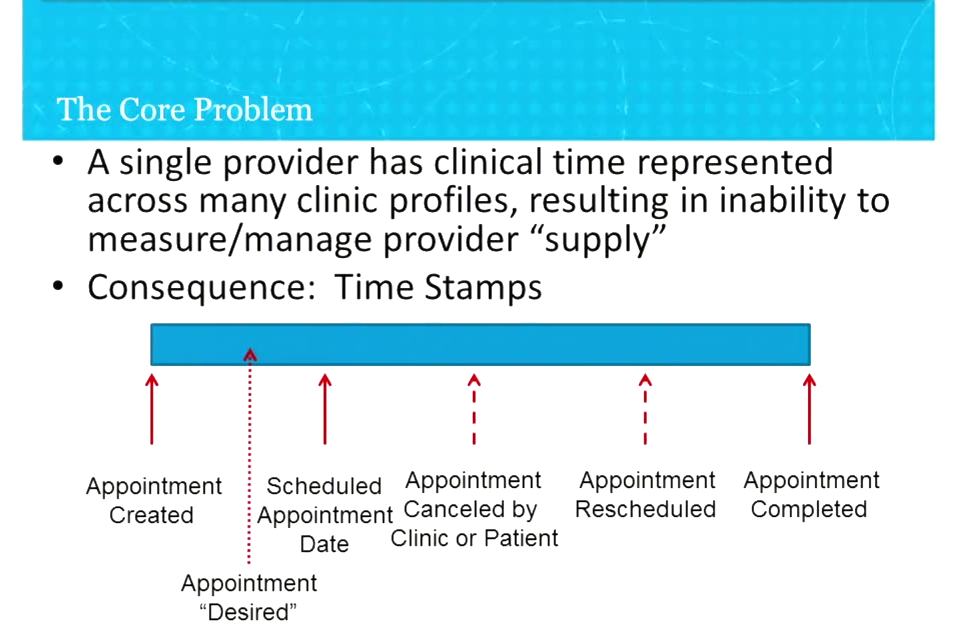 A slide from a June 18, 2014 presentation on VA’s planned acquisition of a commercial scheduling system.