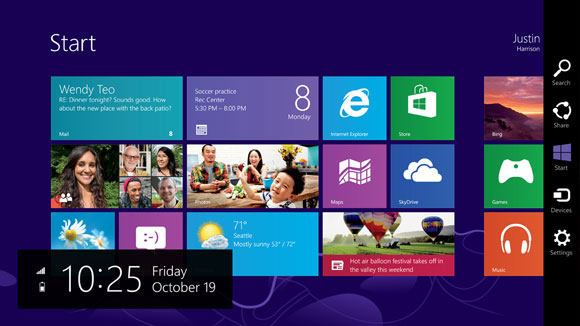 It’s been less than a month since Microsoft released Windows 8, the new operating system for personal computers.

Below we look at eight new Windows 8 innovations of importance to the technology needs of government.

Windows 8 features an extensively redesigned user interface incorporating a design language codenamed “Metro,” optimized for touchscreens as well as mice and keyboards. A new “Start screen,” similar to the one in Windows Phone, includes live application tiles. The Start screen replaces the Start menu, being triggered by the Windows key, clicking a hot corner in bottom left (replacing the Start button), and is also the first screen shown on startup. The user can go to the regular desktop via a tile on the Start screen, or by launching a desktop application.

The interface also incorporates a new menu bar on the right side of the screen known as the “Charms” bar, which can be accessed from any app or the desktop by sliding from the right edge of a touchscreen or compatible trackpad, pointing in one of the right corners of the screen. The Charms bar includes functionality for search, sharing, accessing the Start screen, managing devices and settings, all of which can be directly integrated with apps. New apps for Windows 8 run in a full-screen layout by default. On displays with a widescreen resolution, apps can be snapped to the side of the screen, allowing multi-tasking to an extent.

Windows 8 allows the use of a new platform, the Windows Runtime (WinRT), to create a new type of application that runs in a secure sandbox, and facilitate easier sharing of data between them, or snap to the side of a widescreen display for multi-tasking. WinRT, being a COM-based API, allows for the use of various programming languages to code apps, including C++, C++/CX, C#, Visual Basic .NET, or HTML5 and JavaScript.

Windows Store is a digital distribution platform built into Windows 8, which, in a manner similar to Apple’s App Store and Google Play, allows for distribution and purchase of apps designed for Windows 8. Developers will still be able to advertise desktop software through Windows Store as well. To ensure that they are secure and of a high quality, Windows Store will be the only means of distributing WinRT-based apps for consumer-oriented versions of Windows 8.

“File History,” a function similar to Mac OS X’s Time Machine, replaces the “Previous Versions” and “Backup” and “Restore” features on Windows 8. File History automatically creates incremental backups of files stored in libraries and user-specified folders to an external storage device (such as a secondary hard drive, storage space or network share). Users can then track and restore specific revisions of files using the History functions in File Explorer.

“Windows To Go” is a literal corporate Windows 8 desktop on a bootable external USB stick. With Windows to Go and companion device licenses, you don’t have to give over your personal machine or device to the enterprise. Windows To Go supports the bring your own device trend and provides a new way to ensure security with a focus on the information instead of the device.

Windows 8 can now detect when a system is experiencing issues that have been preventing the system from functioning correctly and automatically launch the Advanced Startup menu to access diagnostic and repair functions. Windows 8 also adds “Refresh” and “Reset” options, which allow users to re-install Windows without needing to use installation media. Both of these options reboot the system into the Windows Recovery Environment to perform the requested operation.

Desktop as an app

The traditional desktop environment is treated as a Metro app, but users can easily flip between the traditional Windows interface with which they are familiar and the new Metro interface.

Microsoft Federal Vice President Greg Myers said the government information worker will be able to work faster and smarter than ever before, as the system aims to be more aligned with how people access data and information.