The demonstration day showcased some of the progress made in the aftermath of Hurricane Sandy which stormed the East Coast in 2012, leaving not only a wake of distraction, but a prolonged period of digital disruption for businesses and the population, prompting the Obama administration to launch the White House Innovation for Disaster Response and Recovery Initiative.

Representatives from the departments of Health and Human Services, Homeland Security, Energy and from   FEMA, the National Geospatial-Intelligence Agency and others agencies announced a variety of new initiatives to help the public cope with disasters like Hurricane Sandy.

Karen DeSalvo, the national coordinator for health information technology at HHS said  the department is about to launch a new At-Risk Resiliency Interactive Map, which uses open data to map the location of citizens who depend on power for oxygen tanks and other health services who would be at risk during power failures.

DeSalvo, a former New Orleans health commissioner, said while the Big Easy was out of power due to Hurricane Isaac, she struggled finding members of her community who needed electricity to maintain their health. At the time, DeSalvo relied on a medical special needs registry, which identifies individuals who must leave their homes during emergency power outages.

However, even though the registry was accurate and up-to-date, when emergency officials began going door to door, they found individuals who were not on the registry but still needed electricity for medical purposes. The registry contained only 15 of the eventual 617 people located by a primitive version of what would become the At-Risk Resiliency Map.

“The fact that we had been standing up on podiums and telling people to call 311 and get registered so they could get help in a time of need was really missing them and missing the mark,” DeSalvo said. “So, in partnership with HHS, we developed a protocol plan that would allow, in the event of a disaster, durable medical equipment-needing patients in our community to be identifiable.”

The interactive map is not just for rescue, though, DeSalvo said. Access to that data enables communities to make decisions about power restoration in the wake of a disaster.

“One of the questions health commissioners get asked in the event of a power outage is, ‘Which of these neighborhood blocks do you want to turn back on?’” DeSalvo said. “In the absence of knowing where the concentration of folks who had durable medical equipment lived, it was a little bit of a guess.” 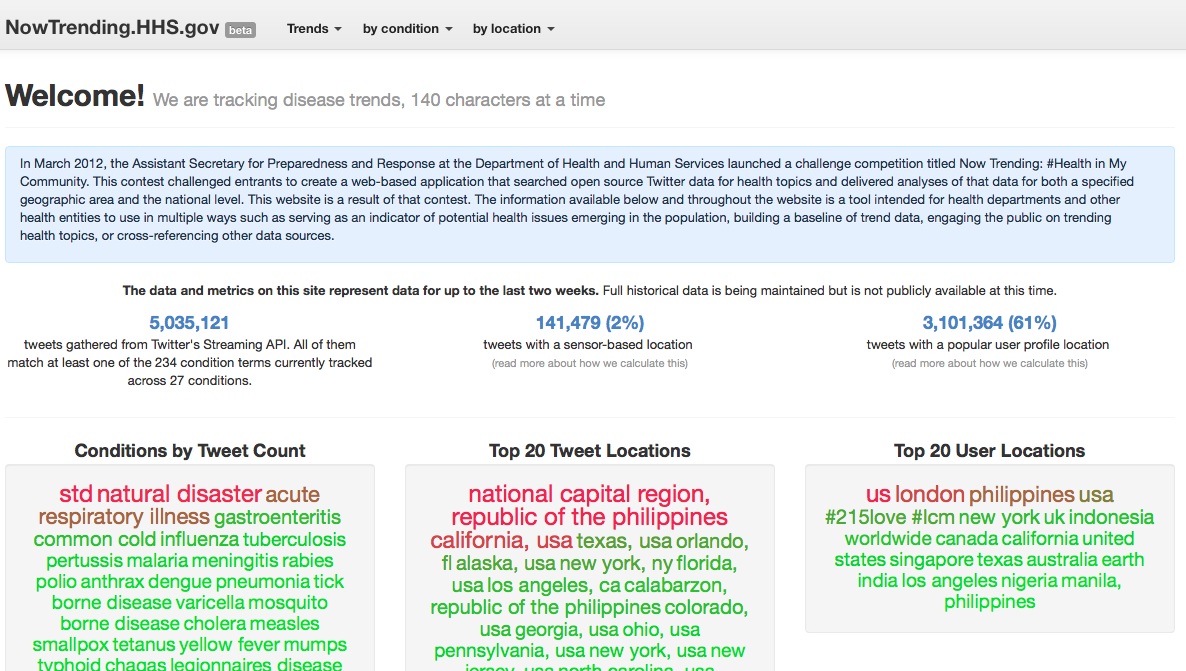 HHS is also rolling out its Web-hosted Now Trending application, which uses open-source Twitter data to alert emergency and public health officials of potential health issues emerging based on what community tweets. 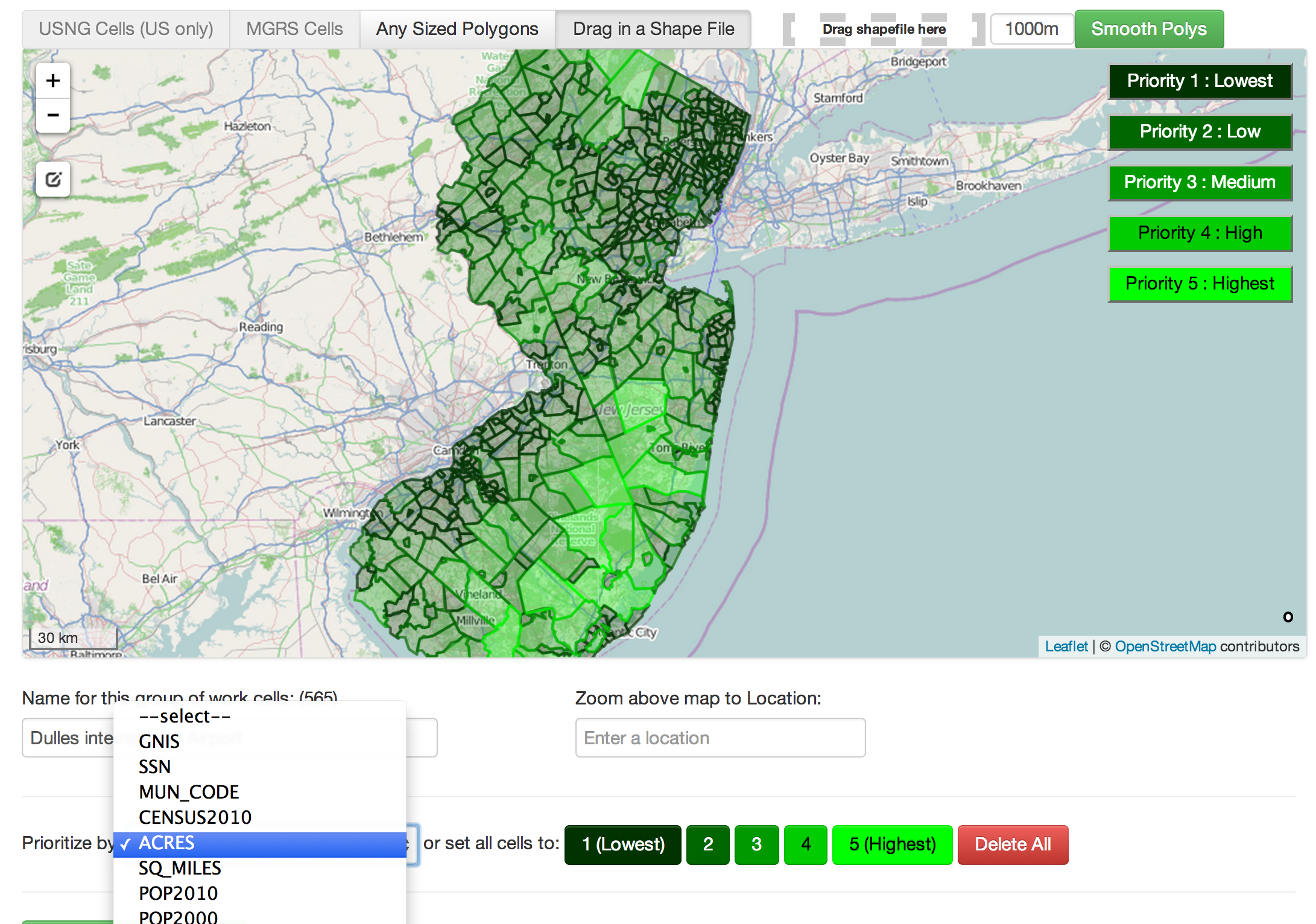 The National Geospatial-Intelligence Agency’s GeoQ tool allows officials to create zones and crowdsource information from those zones during a disaster.
Source: NGA GitHub

The National Geospatial-Intelligence Agency announced its GeoQ tool, which uses crowdsourcing to examine damage over large areas. Using GeoQ, municipalities would have the ability to create customized maps of danger zones that would allow citizens to upload geo-tagged photos of damage to a corresponding database, giving residents visual details of areas affected. The software code for the GeoQ tool is open-source and available now on GitHub.

The Energy Department showcased its mobile application Lantern Live, featured in President Obama’s disaster preparedness briefing at the beginning of the 2014 hurricane season. The app, not publicly available yet, provides citizens with preparedness tips and location information on power outages and gas stations during a disaster.

In 2010, the Department of Homeland Security began its Next-Generation Incident Command System (NICS) initiative. The department tested it in California as a response to wildfires in San Diego, according to a congressional testimony from Robert Griffin, the director of DHS’ first responder group.

Now the department is transitioning NICS to a more collaborative, online mapping tool to improve first responder awareness. As of the presentation, the tool was available to half of the country and has been used to track more than 300 dangerous events.

In addition to NICS, DHS also announced AgCONNECT — a group of mobile and Web applications that help track the outbreak of animal diseases. And the department didn’t stop there — DHS’ science and technology directorate will partner with two private sector companies to host a hardware hackathon in New York this October to examine the possibility of making cities more resilient to disasters like Hurricane Sandy.

The event also featured the initiatives of a number of private sector companies, several of which enabled its users to provide services for free or at a very low cost. For instance, if an emergency occurs, home-sharing app Airbnb will allow hosts to open up their homes to evacuees or emergency responders. Similarly, Getaround, a car-sharing service, will enable users to offer their cars for low-cost or free during an emergency.