The majority of U.S. government agencies do not have the network infrastructure in place to support modern software tools that would make networks more secure and easier to manage, according to a new survey of federal IT decision-makers at 64 federal agencies.

The survey suggests that while most IT leaders grasp how networks controlled by software could improve IT security and significantly increase network scalability and agility within their agencies, only a limited number of agencies have actually taken steps to take advantage of those tools.

At issue are aging networks that rely heavily on large numbers of physical devices to transfer data “envelopes” and route them to their intended destinations. Software-defined networks and network function virtualization tools — that can adjust firewall, load balancing and router settings virtually — offer administrators much greater overall control of their networks. But it may be years before agencies can take advantage of them.

“Networks based on traditional IP technologies limit an agency’s ability to take advantage of the incredible innovations that are happening in IT,” said Rohit Mehra, vice president of network infrastructure at IDC, in a statement accompanying the June 17 release of the survey results. “These advancements can enable dramatic improvements to the way agencies can securely deliver digital services to citizens, military personnel, government employees and veterans.”

But little more than one in 10 federal executives surveyed believe their agency’s network infrastructure is fully able to support those tools. The improvements would help IT administrators automate, add capacity, or modify the architecture and control of their networks much more quickly and efficiently. 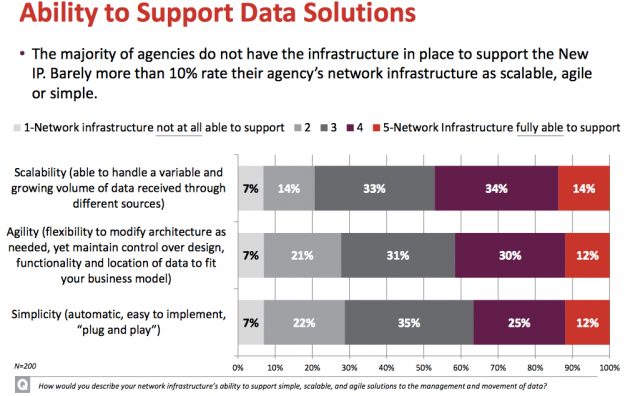 Roughly half of respondents cited budget constraints among the obstacles they face in trying to improve their network infrastructure, followed by a lack of internal resources and expertise, and contractual restrictions. A quarter of those surveyed said it wasn’t an agency priority at this time.

The survey also found that 90 percent of respondents believe open standards for network operations are important — yet only 47 percent are considering a move to open network standards, or planning to adopt them in the next few years. And only 11 percent have actually done so to date.

Security concerns remain the most commonly cited reason for not considering open standards, even though the Defense Department and intelligence agencies have been using open standards for many years.

“There was an admission [agencies] absolutely have to move in this direction both for scale and security. What surprised me is how little has been done,” said Philip O’Reilly, chief technology officer for Brocade’s U.S. federal market, in reaction to the findings. “There’s an awareness, but I don’t see a sense of urgency.” 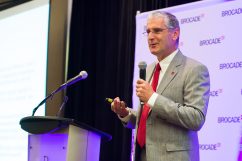 O’Reilly also sensed a disconnect in the way federal IT leaders view network virtualization. “I think people are thinking of virtualization in the classic hypervisor environment,” which allows multiple operating systems to share a single hardware host. “But virtualization of the network is very different and much less understood,” he said.

But more than that, virtualized networks can be made “more secure because security can be built in instead of being bolted on,” with security mechanisms distributed throughout the network, not just at the perimeter, he said. Virtual networks can also be configured to turn off ports or redirect traffic automatically during an attack.

IT leaders polled in the survey appear to see the merits of software-defined networks. More than a third of respondents (37 percent) are considering a move to a software-defined network; another 22 percent “plan to implement SDN in one or more areas in the next one to two years; and 11 percent are “currently implementing SDN in one or more areas of the network.” The remaining 31 percent are not considering SDN.

The study also found that 52 percent of respondents are considering higher level orchestration tools, such as CloudStack, vCloud Director, OpenStack and Eucalyptus that manage the entire datacenter, service storage and network. 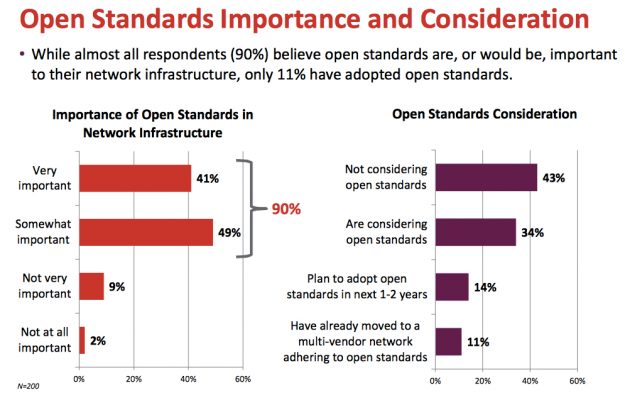 Visit Market Connections’ website for the full results of ” The New IP Study 2015.”