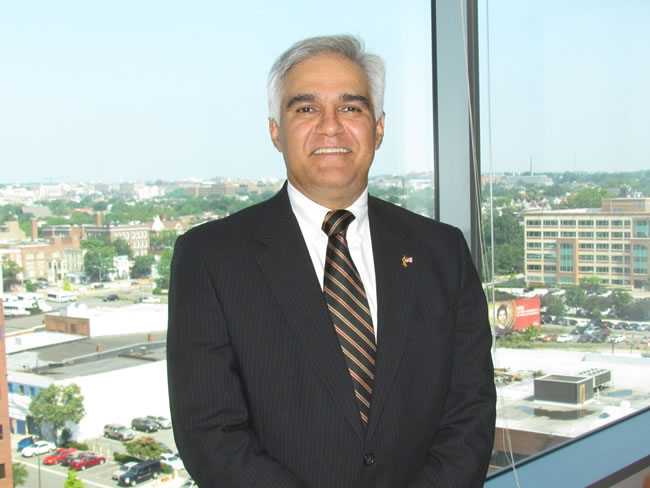 As you can see from our picture, former Deputy Associate Administrator in GSA’s Office of Citizen Services and Innovative Technologies Sonny Bhagowalia always comes to work sharply dressed in a suit and tie, except for one day last week when he donned a Hawaiian shirt as his colleagues honored him with an “Aloha Party,” celebrating his new job as the first CIO for the state of Hawaii.

“It was the first time any of them had seen me out of a suit,” said Bhagowalia, who worked at GSA the past year and two months after serving as the CIO at the Department of Interior, the CIO at the Bureau of Indian Affairs and eight years with the FBI. “GSA has been such a great organization to work for and I’m going to miss it terribly, but I’m also excited for the challenge ahead of me.”

At the party, Bhagowalia said a number of Federal CIOs came to wish him off, along with Federal CIO Vivek Kundra and GSA Administrator Martha Johnson.  He also received letters of Commendation from the Federal CIO, Federal CTO Aneesh Chopra and Johnson.

Bhagowalia joked that there’s been no shortage of offers for people to help him with his new job in Hawaii. He said taking over as CIO in a state that’s never had one, poses its unique challenges, but it also gives him the opportunity to “do it right” and create an environment that lets the government deliver services to citizens in innovative and efficient ways.

It also gives Bhagowalia, who thought the original email asking about his interest in the job was virus-filled spam, a chance to bring some of the technologies and innovations he’s helped GSA develop during his stint.

“I’ve worked in every level of government except state and local, but from what I’ve seen is they all have the same challenges: tightening budgets, increased demand for services and ever-changing needs,” Bhagowalia said. “Whatever technologies you use, though, it always comes down to the people and I’m excited to get things started.”

Bhagowalia pointed to GSA initiatives like the move to cloud computing, the use of agile development, the development of FedRAMP, the open government initiative and data.gov. He’s also proud of being the CIO who put the Bureau of Indian Affairs back online after being taken off for nearly six years and the work as Interior CIO, where he began the unification of 13 separate IT offices and got to all Green on the OMB scorecard.

“In every place I’ve worked in government the mission has been different, but they’ve all been important,” Bhagowalia said. “Even though I’m leaving, the show will go on because there are always hard-working and smart people in government ready to keep innovating and bringing services to the citizens.”

Oh, and for the friends of Bhagowalia, he tells us his days as a federal govie likely aren’t over. He still has tons of business and personnel contacts in the Washington D.C. area and says a return is possible in the future once he completes the mission in Hawaii.

by Dave Nyczepir • 55 mins ago
Tech

by Sara Wilson • 1 hour ago
Tech