A new Pew Internet survey published Thursday found 86 percent of Internet users have taken some step — whether simply erasing browser history or encrypting their email — to protect their personal information. But most users were looking to avoid hackers, criminals and advertisers — not the government or law enforcement. In fact, most Americans believe the government should be the one strengthening online privacy laws. 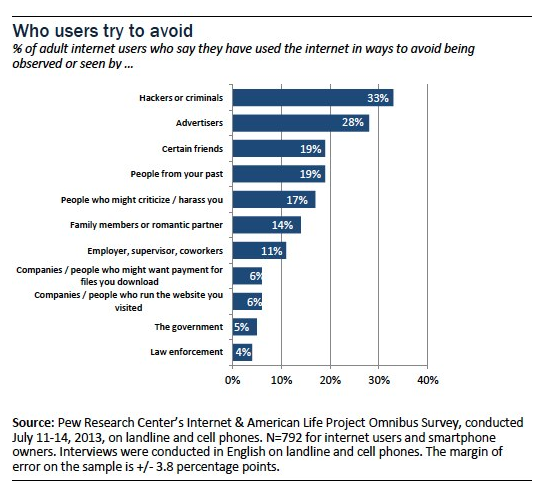 “Users clearly want the option of being anonymous online and increasingly worry that this is not possible,” Lee Rainie, director of the Pew Research Center’s Internet Project, said in a statement. “Their concerns apply to an entire ecosystem of surveillance. In fact, they are more intent on trying to mask their personal information from hackers, advertisers, friends and family members than they are trying to avoid observation by the government.”

“This reinforces the notion that privacy is not an all-or-nothing proposition for internet users,” the study reads. “People choose different strategies for different activities, for different content, to mask themselves from different people, at different times in their lives.” 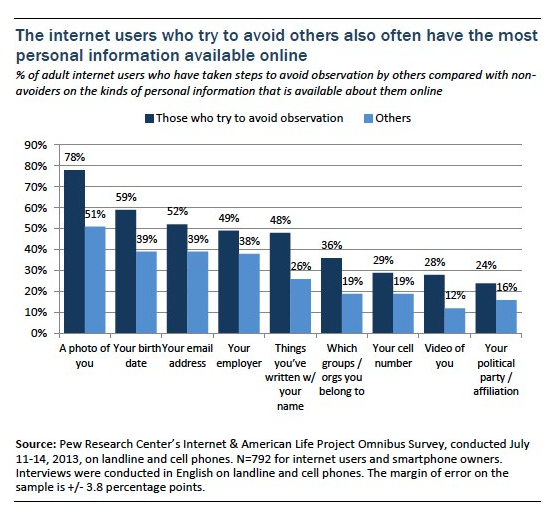 And political affiliation had little to do when it came to feelings about privacy laws. Two thirds of respondents said the laws were “not good enough,” and that number essentially held across the ideological spectrum.

“Interestingly, there are not noteworthy differences in answers to this question associated with political or partisan points of view,” the report reads. “Tea Party supporters, conservative Republicans, self-described moderates and liberal Democrats are not statistically significantly different in their answers.”

Perhaps in light of new discoveries that the National Security Agency can collect older emails with a subpoena and not a warrant, 68 percent of respondents said it was “very important” to control who can access their email. Email content privacy ranked as more important than protecting location information, online chat content and Internet search history.

But overall, Americans are just more worried in general. In September 2009, only a third of Americans said they were worried about personal information online, but that number has risen to a half in the most recent survey.

The survey was conducted via 1,002 landline and cellphone interviews from July 11-14.