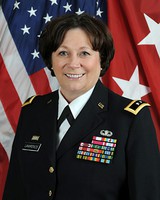 Lt. Gen. Susan Lawrence is stepping down after 41 years of service in the Army.

After more than 40 years in the Army, Lt. Gen. Susan Lawrence is retiring from government. But it’s with some reluctance she’s hanging up her stripes, so to speak.

“I hate taking off the uniform,” she admitted to FedScoop, “but after 41 years — and my CIO term coming to an end — it was time to transition, and I wanted to see what else was out there.”

Lawrence, who joined the Women’s Army Corps in 1972 and became commissioned in 1979, was named CIO in March 2011 after a career in various leadership positions and operational assignments that took her around the world. She became the first woman in the Army to hold the CIO position, overseeing a $10 billion annual IT budget. Her role also entailed advising the Army chief of staff on network, communications and signal operations

Lawrence announced her retirement Oct. 2 on the CIO/G6 Blog, and spoke with FedScoop just hours later.

As CIO, Lawrence led the Army in one of its most ambitious IT missions to date, and this summer finished its move to DOD enterprise email. In her farewell blog post, Lawrence called the migration one of Army’s “highest-priority IT initiatives and greatest achievements,” allowing more than 1.43 million NIPRNet users and 115,000 SIPRNet users to access their email securely from anywhere in the world.

While she’s now leaving the CIO role and the Army, “I’m still very committed to the objectives and the goals around how to acquire IT better, faster cheaper,” she told FedScoop.

Where she lands next remains uncertain. The right fit, Lawrence said, will be someplace where her background and expertise gel with the organization’s needs.

“I’m leaving it open; I’ll cast the net wide and see what’s available,” she said. “Had I listened to all my mentors, I would have taken a few months off, but I already have a few interviews lined up.”

Mike Krieger, deputy CIO will be stepping in as acting CIO. As for her permanent replacement, Lawrence said she felt confident with whoever would fill her shoes, thanks to the support from an “unbelievably talented, professional team.”

As for some advice for whoever comes into that role, Lawrence again tipped her hat to her team.

“My advice is: Let them do what they do best,” she said. “This team has the best ideas, best plans, and I’m proud of how the work we have done within the department and across the government as teammates.”

Colby Hochmuth contributed to this story.