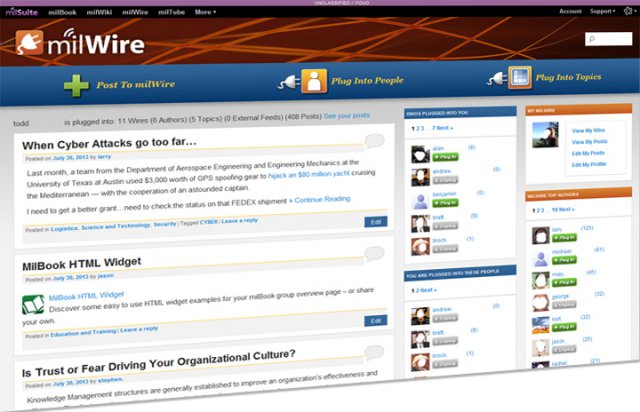 The Pentagon is growing its own Internet within the Internet.

“With milWire, people can choose to follow me, specifically, or a topic, in general,” said Teri Centner, a contractor working as a knowledge engineer for the Joint Staff J-6, said in an Army press release. Centner posts to milWire weekly. “So, in this way the audience for my posts is self-selected, but people from across the department can read what I post, even if I’ve never met them — that’s powerful.”

Sequestration, cybersecurity, arts and music and education are examples of the 15 topics to which DOD employees can subscribe on milWire. Users can post content relevant to these topics that they’ve written, or post hyperlinks and embedded videos.

MilWire is integrated with the rest of the Pentagon’s social sites, which it collectively calls the milSuite. So content posted to milTube or milWiki, for example, can be cross-posted to milWire, helping the different military services cross-pollinate.

“Anything that helps the members of the DOD share ideas and information is beneficial, especially if it can cross the boundaries of components and specialties,” Centner said.

But milWire is not yet integrated with external news sources, a fact DOD has not overlooked. The team working on milSuite is looking to add a milWire feed that aggregates a number of outside defense news sites.

“We’re trying to find the best way to integrate external information into the site, since we want the community’s contributions to still be front and center,” Tom Curran, product director for milSuite, said in a press release.

by Jackson Barnett • 1 min ago
Defense