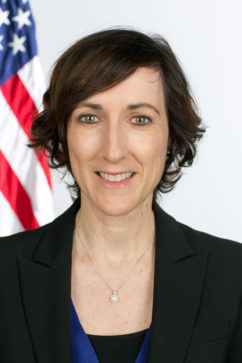 Anne Rung, the outgoing administrator of the Office of Federal Procurement Policy, created a blueprint two years ago of how she intended as the federal chief acquisition officer to transform and simplify the way agencies buy goods and services.

As Rung says her goodbyes Friday, moving west to head up Amazon Business’ public sector division, she leaves knowing that since publishing the December 2014 blueprint memo, the federal government has made measurable progress improving the way it procures things, particularly IT.

“I look back on the memo I wrote two years ago … and I’m proud that I think we’ve accomplished a great deal of what was in that,” Rung told FedScoop in her last interview as chief acquisition officer. “When I look back I can cite the fact that we’ve saved more than $2 billion through category management,” and that number is on track to reach $3.5 billion by the end of next year.

That’s not to mention the critical role she’s played in cutting prices on IT workstation contracts, recruiting more than 10,000 users to the General Services Administration’s Acquisition Gateway, creating agency innovation labs and advocates, and launching the Acquisition 360 survey “that allowed for the first time companies participating in the federal market to give us feedback on specific IT acquisitions.” She also led pivotal changes around acquisition at the agency level during earlier stints at the Commerce Department and GSA.

The list goes on — and the work will go on without her, too, Rung said.

“I always think that there’s more to be done,” she said. “We laid a great foundation, but there’s a lot more to build on these efforts. We intentionally started many of these efforts like a startup company, small and focused and experimenting and scaling up over time, and now’s the time to start scaling these projects up.”

Her deputy, Lesley Field, will take over her position in an acting capacity.

“She’s been driving many of these efforts since I arrived,” Rung said. “We have a lot in the pipeline as well that will be coming out in the next few months. We’re not slowing down with my departure.”

Next week, OFPP will publish a category management circular in draft form for public comment that looks to instill the progress made around the initiative under President Barack Obama regardless of who the next president is come January.

“That is taking all the good work of the past few years and really laying it out in specificity in one document and ensuring that this is embedded in the agencies as the way we’re going to continue to buy in the years to come,” Rung explained.

But on an even broader level, Rung doesn’t see procurement and acquisition as topics that would be considered partisan if things get messy during the transition.

“Procurement is one area where you have to think of it as a business function, and it really is not a partisan issue,” she told FedScoop. “We’ve been fortunate that historically it hasn’t been viewed in a partisan light, and it really is about how we’re smart and effective about delivering goods and services valued at more than $440 billion a year. Category management and innovation work and improving vendor relationships transcends partisan politics.”

Rather it’s that “sheer size and complexity” that Rung advises her successors under a new administration should keep their focus on.

“We’re the largest supply chain in the world. No other company or government is as large as the U.S. federal government,” she said. “Coming into this position, you have to be very strategic about how you want to make improvements, and the best way to do that, for me, it was thinking of every effort like a startup company and starting small and focused and experimenting and scaling up over time. It’s, I think, been an effective approach to improving the federal acquisition marketplace, which is just so large and vast and complex.”

It also helps to partner with colleagues around government who are the experts in their fields, like Rung did quite often over the past two years with U.S. CIO Tony Scott.

“That’s the key for any administrator moving forward, to ensue that there’s a close partnership, and not just in the IT space,” she said.

And even though she won’t be around anymore when they come to fruition, there are several IT acquisition initiatives Rung, with Scott and others in the IT and contracting communities, developed that will bear fruit before Jan. 20, 2017, including the finalization of two more governmentwide software agreements, the addition of 30 more IT acquisition specialists at agencies around government, and the launch of a contract simplification project “in partnership with some experts in human-centered design, lawyers who specialize in plain language, and procurement and IT specialists around the federal government,” she said.

Though she’ll step away from public service after seven years, Rung looks back on her time fondly, hoping she left a legacy that “helped change the perception of acquisitions as a backroom, transactional, boring function to the correct perception that it can be incredibly strategic and important to the delivery of an agency’s mission.”

“It’s been an incredible experience, and I often think the term government employee is not a term that I like as much as a public servant, because I really believe passionately in the mission to serve the public,” Rung said. “And what I’ve learned over the past seven years in this administration — if you ask yourself that question, ‘Is this in the best and highest interest of the public that we serve?,’ you can never go wrong.”