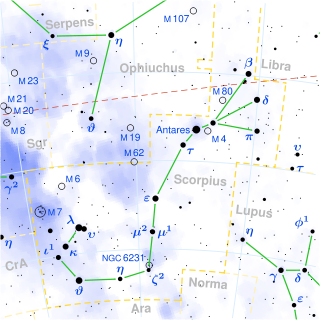 Star chart of the constellation of Scorpius showing the position of Gliese 667. (Photo: Wikipedia)

An international team of astronomers, including one at the University of Washington, just announced the discovery of additional planets in a star system previously thought to have only a few.

When scientists first took a look at Gliese 667 a few years ago, they could barely make out any planets orbiting the dim third star of the triple-star system, GJ 667 C. It is a red dwarf relatively dim compared to its sisters, two yellow K-type stars a bit like our own sun, though not nearly as bright.

GJ 667 C was originally thought to have only a few planets, but now they have discovered it has from five to seven worlds, three of which are smack dab in the middle of the star’s habitable zone.

To find these planets, the astronomers used Doppler spectroscopy. This process doesn’t reveal the actual mass of each planet, but only a minimum one. However, because the relative crowding of so many planets in or near its habitable zone, the scientists are able to estimate their maximum mass.

Of the three, the smallest is at least twice the mass of Earth, and the largest is almost eight times as big. Planets in this size range have been dubbed “super-Earths” because even though they are significantly larger, they are pretty likely to be Earth-like in other respects.

To find so many potentially habitable planets in a single star system is one amazing thing, but to have that star system so close is beyond belief. OK, I used “close” in cosmic terms — the star system is about 22 light years away, which translates to about 129 trillion miles. That really is like a walk to the grocery store when compared to the vastness of known space.

Of course, our current space-faring technology is barely able to take people to the nearest planet in our own star system, so going to other stars is currently beyond us. But if we ever get to the point where we can undertake interstellar travel, the wealth of planets of GJ 667 C is probably the best place to start exploring.

This discovery of course opens many doors, as astronomers will now take closer looks at other red dwarf stars with the same method. It is by far the most common type of star, and there are several even closer to us than Gliese 667.