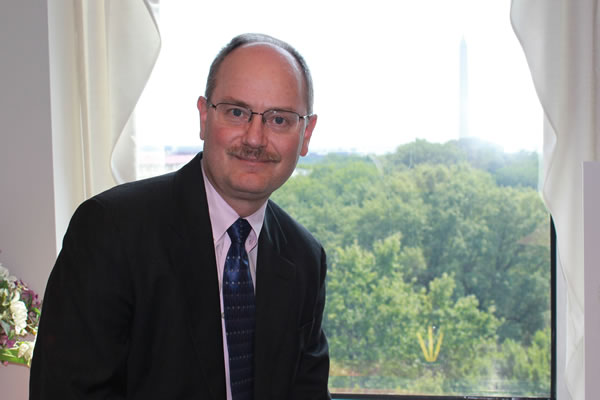 Roger Baker, the chief information officer at the Department of Veterans Affairs, manages one of the largest information technology budgets in the federal government, but he’s also one of the best at finding ways to become more efficient.

Baker, who will give a keynote address on Wednesday at FedScoop’s 4th Annual Lowering the Cost of Government with IT Summit at the Newseum, recently sat down with FedScoop in his office at VA headquarters to discuss his model for IT savings.

Baker said he breaks savings down into three levels: micro, minor and major.

Micro savings, which save between $40 million and $100 million per year, include optimizing software licenses, equipment prices and the like.

Minor savings encompass initiatives like the Project Management Accountability System, known as PMAS, where there is a renovation of some area of the organization. The PMAS program, for instance, drastically changed VA’s deliverables. Baker said before PMAS, the department’s delivery rate was about 30 percent. It now stands at 90 percent. To put it in broader terms, when the agency spent $1 billion before, it was getting $300 million in successful software deliverables. That number is now $900 million.

A big part of that has been Baker’s insistence on shorter deadlines for information technology projects. He said that no project at the VA has longer than a six-month deadline aimed at keeping programs on task and from spiraling out of control.

Baker compared the approach to that of an Army sniper.

“It’s the same thought with program management,” Baker said. “A program manager that can handle every aspect of a multi-year multi-billion dollar project and keep it on track is rare, but there are lots of skilled people that can meet a six-month deadline.”

Baker said this is when technology can be used to completely change the way a business works.  For VA, it’s the VISTA system, where the department invested $4 billion and got a return of approximately $7.5 billion.

Baker said VA is currently doing the same thing now from the benefits side with parts of the new GI Bill, including more automation, meaning fewer employees are needed for the next 20 years to process claims.

“When you use IT well and completely change the way a business works, that’s a major savings,” Baker said. “So, if you think about them asmicro, minor and major, that’s kind of the discussion that I want to have next week.”

All this, of course, cannot be done without a management structure in place. Baker said as CIO his approach is to knit everything the information technology organization is doing into a strategy and make sure everyone is headed in the same direction.

“We have a great staff at VA, and we have this tremendous benefit of being such a large consolidated organization,” Baker said. “You know when I go out and look for a head of systems development, which we did about two and half years ago, what I can offer to that individual is this: how would you like to run a 4,000-person software development organization?”

Baker continued,”Even in government , not a lot of people get something of that size, and then you add in, ‘Oh, by the way, you are going to run the process that is renovating the way all of government does development.’ Think about that from a career aspect. Same sort of thing with our security side, financial side operations side.”

That’s what has helped Baker bring in top-tier talent, even though he can’t match the financial benefits of the public sector, where he spent almost his entire career before becoming CIO in 2009.

“I’m a private-sector guy,” said Baker, who was CEO of Dataline before coming to VA, “and it’s truly the private sector that sets the expectations, but also gives us guidance for how to structure ourselves in a lot of ways. I can run this just like I’m the CIO of a large private-sector organization and that flexibility can only lead to success.”