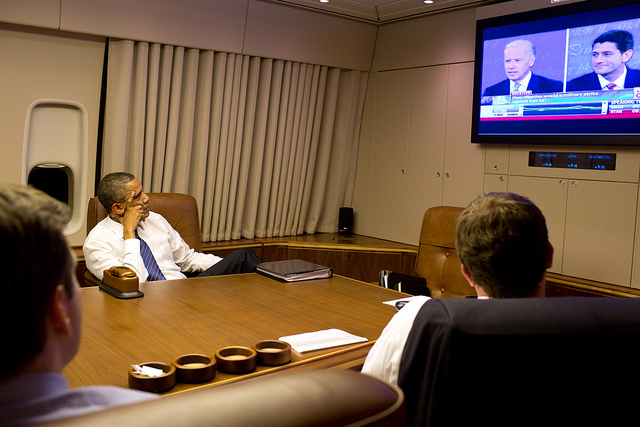 Biden criticized Ryan and the campaign of Republican challenger Mitt Romney over the secretly videotaped comment of the former government saying he doesn’t have to worry about the 47 percent of Americans that don’t pay federal income taxes.

“These people are my mom and dad, the people I grew up with, my neighbors,” Biden said, adding he’s “had it up to here” with those kinds of comments.

When it comes to the economy, Biden conceded Republicans indeed have a plan, but he said if it were enacted, it would have “eviscerated all the things the middle class care about.”

With the moderator, ABC News’ Martha Raddatz, opening the debate with a question about the Libya U.S. embassy strike, which happened a month ago Thursday, Ryan criticized the administration for waiting more than a week after the strike to call it a coordinated terror attack.

“This is becoming more troubling by the day. They first blamed the YouTube video. Now they’re trying to blame the Romney/Ryan ticket for making this an issue,” he said.

Medicare was a flashpoint, as well. Ryan said Obama’s health care plan had diverted $716 billion from the program for seniors and created a new board that could deny care to patients who need it.

Democrats “haven’t put a credible solution on the table,” he said. “They’ll tell you about vouchers. They’ll say all these things to try to scare people.”

There are two final presidential debates, on Oct. 16 and Oct. 22. The next one will be a town hall format focusing on a range of issues, and the last one will focus exclusively on foreign policy.