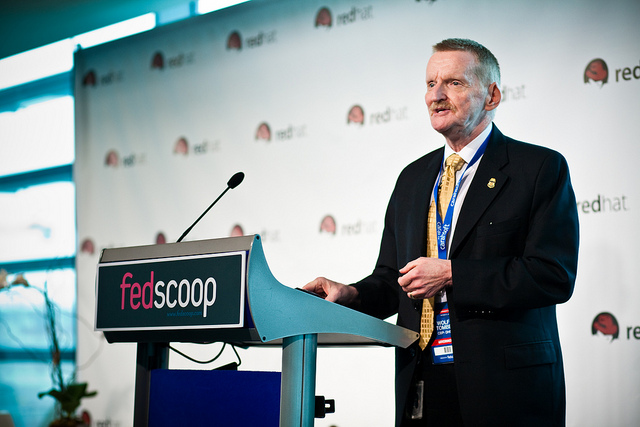 Add Wolf Tombe, chief technology officer at the Department of Homeland Security’s Customs and Border Protection, as the latest government technology executive to proclaim the cloud is safe.

Speaking Wednesday at the Red Hat Government Symposium, presented by FedScoop at the Newseum, Tombe said security is the least of his concerns when it comes to the cloud, but the biggest challenge comes in the applications.

“The newer applications migrate easily to the cloud,” Tombe said, “but it’s the legacy applications where there is a real challenge to make sure they work properly on the new platform.”

It’s no wonder then that Tombe said he can’t rule out the use of a public cloud in the future, mainly because of the significant cost savings attached. Those savings could be handy considering the CBP suffered a $330 million budget cut and still needs to provide IT for 26,000 employees across 17 countries, consuming 10 petabytes of storage on a daily basis.

“The idea of doing more with less is a nice phrase,” Tombe said, “but for us it’s survival mode.”

If there is a silver lining to the budget cuts, Tombe said it has lit a fire under the members of his organization to find cost cutting savings, something he’s been talking about for years, but that has been missing the urgency needed to really take root.

“We have a lot of opportunity in front of us, but also a lot of challenges,” Tombe said.

Part of that will be the move to open source and open standards – Tombe called them “absolutely critical for us” – and proprietary systems are no longer options because they are simply too expensive. In the future, he added, CDP’s common infrastructure is based on open standards and everything moving forward will be based on that infrastructure.

The challenge, though, is not just related to the IT department, but across the organization as a whole. Tombe said he’s working with the acquisition department to speed up procurements so that when he wants a technology, it’s not already obsolete by the time it’s approved.

“There is no point in me buying a cloud system that can be stood up in a matter of hours if it takes me a year to procure,” Tombe said.