Susan Taylor, the Veterans Health Administration procurement official who was removed from her position after an inspector general report accused her of “acting as an agent” of a private contractor, announced her resignation and retirement Tuesday.

“After 29 years of federal service, I have decided to resign and retire, effective Oct. 14,” Taylor wrote in an email addressed to all VHA acquisition employees and obtained by FedScoop. “I will definitely miss the terrific staff I have had at VHA both at Headquarters and in the field nationwide, but I know that you will continue to admirably serve our Veterans through your dedicated service.” 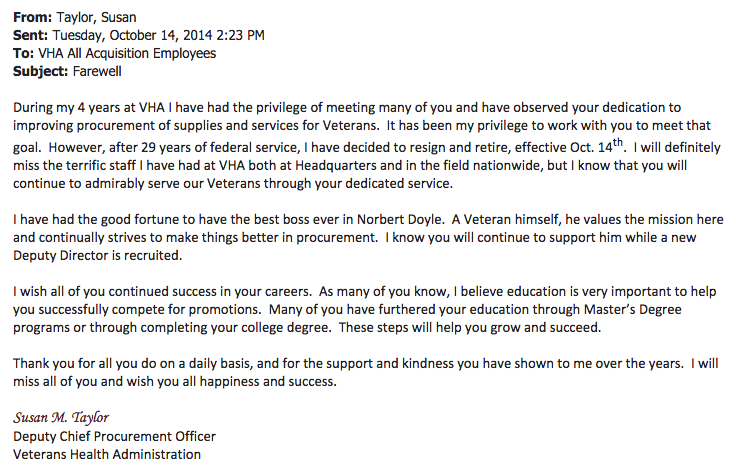 Taylor was the focus of a damning 82-page investigation released Sept. 29 by the VA inspector general in which the agency said she abused her position and “improperly acted as an agent of FedBid in matters before the government.” The IG substantiated that Taylor had been giving private reverse auction company FedBid preferential treatment, going as far as disclosing proprietary information and pressuring contracting staff to award a task order for reverse auction services to FedBid. Although the IG referred the matter to the Justice Department for criminal prosecution, DOJ did not press charges and recommended VA take administrative actions.

The evidence presented by the IG led VA Deputy Secretary Sloan Gibson last week to announce Taylor’s removal. “The proposed removal of the DCPO underscores VA’s commitment to hold leaders accountable and get Veterans the care they need,” Gibson said in a statement. Gibson also announced Ricky Lemmon, director of Service Area Office Central, had been appointed acting deputy procurement and logistics officer until a permanent replacement for Taylor could be found.

Rep. Jeff Miller, R-Fla., chairman of the House Committee on Veterans’ Affairs, said the existing appeals process may be giving failing VA executives and others accused of wrongdoing “advance notice of the department’s plans to fire them” and called on VA leaders to act to hold these executives accountable.

“The department appears to be giving failing executives an opportunity to quit, retire or find new jobs without consequence – something happening with increasing frequency,” Miller said in a statement released just hours after Taylor’s email reached VHA employees. “Quite simply, any VA administrator who purposely manipulated appointment data, covered up problems, retaliated against whistleblowers or who was involved in malfeasance that harmed veterans must be fired, rather than allowed to slip out the back door with a pension.”

A VA spokesperson said in a statement the agency will continue to use all authorities at its disposal to hold employees accountable and take action as quickly as possible. “It is important to note in the case of a retirement-eligible employee who retires after receiving notice of proposed adverse action, VA has no legal authority to stop the employee from retiring or prevent the retirement from taking effect before the removal takes effect,” the spokesperson said.

What started as an investigation into Taylor’s alleged interference with a review of the FedBid contract quickly led the IG to discover that FedBid executives had been taking “significant measures to disrupt and deprive” the Department of Veterans Affairs’ ability “to transact official business honestly and impartially, free from improper and undue influence.”

Procurement experts said the company and its executives could now face potential suspension or debarment from federal contracting. Follow @DanielVerton