The Department of Veterans Affairs today released its audit summary on veteran access to healthcare, less than an hour after the crisis concerning patient scheduling practices claimed the job of former VA Secretary Eric Shinseki.

The audit assesses the integrity of the Veterans Health Administration’s scheduling and access management practices, makes recommendations about policies and sets a course for improvement throughout VA. This first phase of a VA-wide audit surveyed 258 different points of access in the VA healthcare system.

Of the 216 site audits conducted, many were flagged for further review because of concerns identified by the site audit team about questionable scheduling practices, “signaling a systemic lack of integrity within some Veterans Health Administration facilities,” the report states.

According to the audit, more than 13 percent of the 2,100 schedulers interviewed said they had received instructions from senior managers to enter a different date in the scheduling system than the date requested by the veteran when making an appointment.

However, the initial survey conducted by the auditors did not determine if such practices were justified, done by mistake or the result of malicious intent.

Nearly eight percent of schedulers said they used a list other than the electronic waiting list or the Veterans Integrated System Technology Architecture system, known as VistA.

“Information indicates that in some cases, pressures were placed on schedulers to utilize inappropriate practices in order to make waiting times appear more favorable,” the audit summary states. “Such practices are sufficiently pervasive to require VA re-examine its entire performance management system and, in particular, whether current measures and targets for access are realistic or sufficient.”

VA is currently conducting surveys at all remaining sites, which is scheduled to be complete in early June. The agency is also aggregating facility management’s perspective of access challenges, also due to conclude in early June.

The audit also highlights the need to reform the culture throughout the Veterans Health Administration.

“When tied to rewards, measurement of system performance runs the risk of engendering a culture where the appearance of success becomes the driving force,” the audit states. “The validity and precision of measurement is the foundation for all improvement, and therefore it must never be interpreted as punitive or rewarding.”

The report also recommends immediate, short-term improvements to the electronic scheduling system. FedScoop reported earlier this week that VA has known for more than a year of serious weaknesses in VistA’s identity and access management controls, as well as the scheduling module’s overall integration into the enterprise electronic health record system.

Among the improvements called for by the audit are: 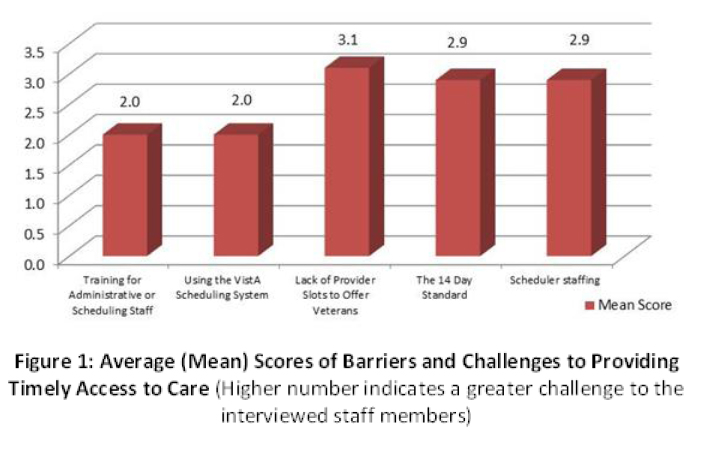