While the Coast Guard has managed to improve situation awareness and communications for many of its newer cutters, funding pressures have drastically reduced the Coast Guard’s ability to upgrade many of its older cutters. (Credit:  Northrop Grumman)

Significant funding reductions have forced the U.S. Coast Guard to defer technology upgrades on older ships and a next-generation aviation mission system, leaving Coast Guard personnel at sea dealing with malfunctioning and obsolete systems, according to a new report from the Department of Homeland Security inspector general.

While the Coast Guard has managed to improve situation awareness and communications for many of its newer cutters and aircraft, funding pressures have drastically reduced the Coast Guard’s ability to keep pace with upgrades to many of the 39 so-called legacy cutters and aircraft that would provide a common system platform and move the Coast Guard away from contractor-owned proprietary software. But the budget for the modernization program, known as C4ISR (Command, Control, Communications, Computers, Intelligence, Surveillance and Reconnaissance) has been cut from $2.2 billion to just $1.4 billion, according to the IG report, released Oct. 28.

“Both the legacy cutter upgrades and the next generation aviation mission system are considered ‘unbudgeted,’ meaning that they have been deferred until funding becomes available,” the report states.

The IG report offers an alarming look at the budget cuts and their impact on Coast Guard operations and personnel safety. Coast Guard personnel aboard one legacy cutter reported having to reboot a malfunctioning radar system several times a day while at sea. “Failure of this radar system is considered the highest category of equipment failure, meaning a deficiency exists in mission — essential equipment that causes a loss of at least one primary capability onboard the cutter,” the IG report states. “When this radar breaks down while at sea, legacy cutters rely on a 40‐year old backup radar system that has limited capability.” 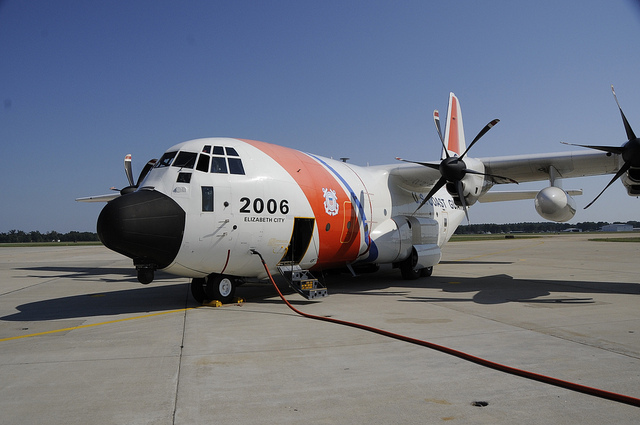 Coast Guard air crews aboard the HC-130J aircraft reported problems with the plane’s video and mission processor that caused system overloads and forced operators to restart the system to update the common operating picture during operations. “Personnel said that it can take 30 minutes to restart the system, which affects the aircraft’s radar and sensors and greatly reduces its operational capability. For this reason, operators turn this functionality off while conducting missions. This limits the information they have about potential targets and other entities in their area of operations,” the report says.

The IG report also details potential cybersecurity risks posed by the continued use of obsolete software. According to the IG, the aircraft mission system uses Microsoft’s Windows XP operating system and Windows Server 2003, neither of which is supported by Microsoft. Because the system uses software that is no longer supported with critical updates, it could lose its security certification. Coast Guard personnel said aircraft could lose critical communications tools, such as the classified chat capability, if the mission system lost its authority to operate, according to the IG report.

The C4ISR program has its roots in a $24 billion contract awarded in 2002, known as Deepwater. Awarded to Lockheed Martin Corp. and Northrop Grumman Corp., the acquisition program was the largest in Coast Guard history and was estimated to take up to 25 years to complete. But the program failed to control costs, and the Coast Guard was forced to walk away from the concept. In 2011, C4ISR replaced Deepwater with distinct acquisition projects to replace or modernize legacy ships and aircraft.

According to the IG report, C4ISR’s acquisition life cycle cost is $1.5 billion through fiscal year 2026. For the first 11 years of the program, from 2002 through 2013, the C4ISR project received approximately $730 million in funding. The annual budget for the project has averaged approximately $37 million each year for the last three years. The project is responsible for supporting C4ISR development and capability for 91 new cutters and 45 new aircraft, as well as upgrades to 39 aging legacy cutters.