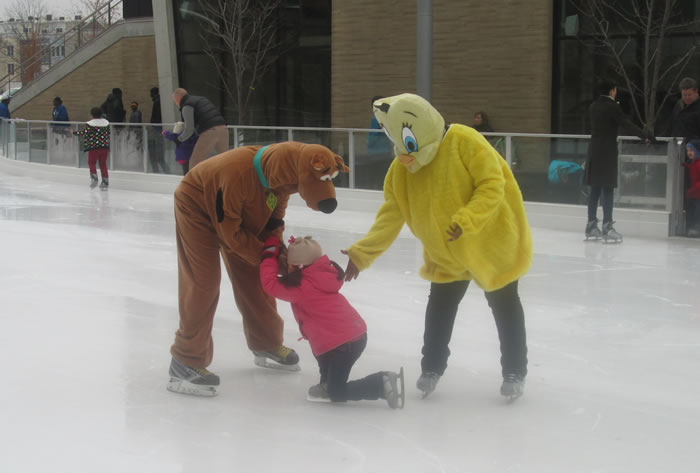 Scooby Doo and Tweety help a young skater up from a fall on the ice at Canal Park Ice Rink in Washington, D.C. (Photo: Patra Wroten)

Does your child cry when he sees Santa? Fear not, you can still create holiday memories with a skate around the rink at Canal Park. Santa won’t be there, but Scooby Doo might spin by you!

In its first season, the Canal Park rink is offering character skates on Saturday mornings. Need some help on your axel jump? Take some lessons, discounted now for the holidays.

Open since November, Canal Park and its Capitol Riverfront neighbors are still coming into their own. Giant snowflake lights line the streets along the park, but so, too, do construction barrels. The Park Tavern is not serving hot chocolate just yet, but families are already using party space by the rink to celebrate children’s birthdays. Once the sound of hammering is replaced by Christmas carols the Canal Park skating rink, a twisty path designed to mimic the Washington canal, promises to be a real winter wonderland.

New York City has iconic ice skating rinks in Rockefeller Plaza and Central Park, but few tourists put lacing up some skates on their to-do list when visiting Washington during the winter. The rink at Canal Park may soon make a spin on the ice a celebrated DC pastime.