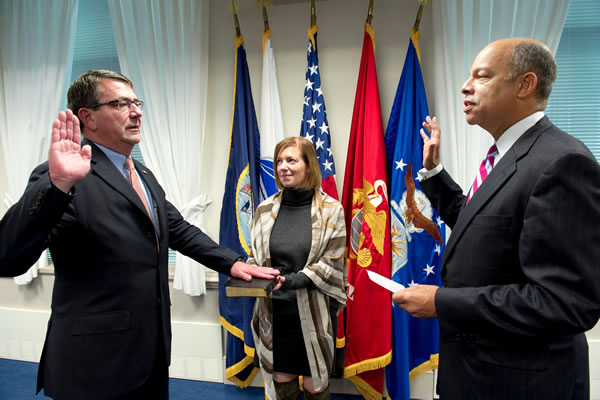 Ash Carter was sworn in this morning at the 31st Deputy Secretary of Defense in a ceremony at the Pentagon.

Carter was formerly the undersecretary of defense for Acquisition, Technology & Logistics. He was unanimously approved by the Senate on Sept. 23 of this year and succeeds Bill Lynn, who served in the position since 2009.

“Ash has a steady hand, a keen intellect, and an effective management style that will help this department keep faith with our troops and protect our nation,” Secretary of Defense Leon Panetta said. “He is already an essential part of my team as an outstanding undersecretary of defense, and I look forward to his continued guidance and leadership as he assumes his new responsibilities.”

Ashton B. Carter is the current Deputy Secretary of Defense and was previously the Under Secretary of Defense for Acquisition, Technology & Logistics. Prior to assuming that position in 2009, he was Chair of the International and Global Affairs faculty at Harvard’s Kennedy School of Government and Co-Director of the Preventive Defense Project. From 1993 to 1996, he served as Assistant Secretary of Defense for International Security Policy. During that time, he directed military planning during the 1994 crisis over North Korea’s nuclear weapons program and was instrumental in removing all nuclear weapons from the territories of Ukraine, Kazakstan, and Belarus. Dr. Carter also directed the establishment of defense and intelligence relationships with the countries of the former Soviet Union when the Cold War ended and participated in the negotiations that led to the deployment of Russian troops as part of the Bosnia Peace Plan Implementation Force. Dr. Carter has been a member of the Aspen Strategy Group, the Council on Foreign Relations and the International Institute of Strategic Studies. From 2006 to 2008, he served as a member of Secretary of State Condoleezza Rice’s International Security Advisory Board. He was twice awarded the Department of Defense Distinguished Service Medal and was also awarded the Defense Intelligence Medal. Dr. Carter holds a bachelor’s degree from Yale University and a doctorate from Oxford University, where he was a Rhodes Scholar.