The Ebola epidemic may no longer have the media attention it did months back, but the virus continues to wreak havoc in West Africa. And to mitigate the risk of another spread to the U.S., the Centers for Disease Control and Prevention is using big data to track migrant populations traveling from affected areas across U.S. borders. 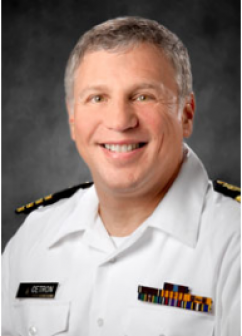 For the past four years, CDC has been piloting BioMosaic, a tool that merges health, population and movement data to predict the spread of disease. The agency has used BioMosaic to track several other epidemics for forecasting, testing, targeting, intervention and surveillance, Marty Cetron, director of CDC’s Division of Global Migration and Quarantine, said during a public discussion in Philadelphia Tuesday. But Ebola, particularly because of its geopolitical significance, fits remarkably well with the tool, Cetron said.

“We have the near real-time availability of the global air transportation network, and we’re able to identify, and in a sense target, the risk populations, the diaspora populations from Liberia, Sierra Leone and Guinea, where they’re distributed down from the county-and-below levels, so we have a mosaic map of the U.S., and in some cases with other countries’ data,” he said.

CDC layers many data sets atop one another to create “this mosaic map of the diaspora population both on the move and statically in terms of the resident population,” Cetron said. The data comes from typical sources — International Air Transport Association flight data, Department of Homeland Security logs from passports checked at borders — but BioMosaic takes much more into account than just human movement.

“There are a number of big data sets that we access and aggregate, the common feature is that all of them are geo-coded,” Cetron said. “So we bring in weather data, climate data, we bring in global distribution of poultry, we bring in distribution of swine populations, vector disease incidents from [the World Health Organization] and other sets, and pull all these things together and then put them in a way that they can be easily visualized or queried.”

It’s no vaccine and doesn’t physically stop the spread of the disease, but BioMosaic plays a critical role in tracking the about 150 people leaving the affected countries for U.S. ports each day. CDC now funnels those potentially at-risk travelers into the five airports most frequented from those countries, which makes it easier to screen for health ailments on entry before they move on to other states. Officials then track them during the critical 21-day incubation period.

Critics of the initial U.S. response to Ebola expressed the idea of a travel ban to the stricken African countries rather than monitoring and managing their migrants’ movement. That likely would’ve undermined BioMosaic’s efforts, Cetron said.

“If you choke the epidemic, not only will you restrict movement of the humanitarian response in and out of the region, which is so critical to control it, you also are likely to drive an economic collapse of these three countries, which could cause a refugee crisis and a mass migration across borders,” he said. “When you drive these full-scale travel bans, you drive all of the human nature of movement underground, people will cross land borders into other countries, find circuitous ways to travel, and we will have lost our ability to assess the risk, to educate, to intervene and to monitor. Diseases don’t have borders.”

Collecting so much data — often personal in nature — about a stigmatizing disease mostly affecting one region of the world is a sensitive issue. It’s critical to protect the privacy of those involved.

“Epidemics of disease are frequently followed and complicated by epidemics of fear and epidemics of stigma,” Cetron said. “It’s a gruesome and merciless diseases; the fear is understandable.”

But Cetron said CDC takes great care of personally identifiable information and uses algorithms to blur identifying elements. For Ebola specifically, he said, CDC has a team whose only job is to look for issues of stigma and overcome them.

For CDC, Cetron said, privacy “goes hand in hand” with data collection and its fight against Ebola.

by Dave Nyczepir • 8 hours ago
Tech

by Sara Wilson • 9 hours ago
Tech