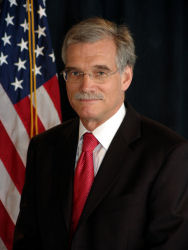 U.S. Census Bureau Director Robert Groves will step down in August to become the Provost at Georgetown University.

Groves has led the Census Bureau since 2009 and directed the completion of the 2010 Census that was finished on time and under its $1.9 billion budget. He has also helped shape the strategy for planning a more cost-efficient 2020 Census.

“I have had the privilege of working closely with Bob during his tenure here, and have been consistently impressed by his vision and creativity,” said Department of Commerce Deputy Secretary Rebecca Blank. “His leadership is a significant loss for the Department, but his contributions will not be soon forgotten. We are all grateful for his service to the Commerce Department, to this administration and to the American people, and we wish him the best of luck in his exciting new role.”

He was the Census Bureau’s Associate Director for Statistical Design, Methodology and Standards from 1990 to 1992, on loan from the University of Michigan.

Groves has authored or co-authored seven books and scores of scientific articles. His 1989 book, Survey Errors and Survey Costs, was named one of the 50 most influential books in survey research by the American Association of Public Opinion Research. His book, Nonresponse in Household Interview Surveys, with Mick Couper, written during his time at the Census Bureau, received the 2008 AAPOR Book Award.

Groves has a bachelor’s degree from Dartmouth College and master’s degrees in statistics and sociology from the University of Michigan. He also earned his doctorate at Michigan.

He and his wife, Cynthia, have two sons − Christopher a recent graduate of Purdue University and Andrew, currently a student at Northwestern University.