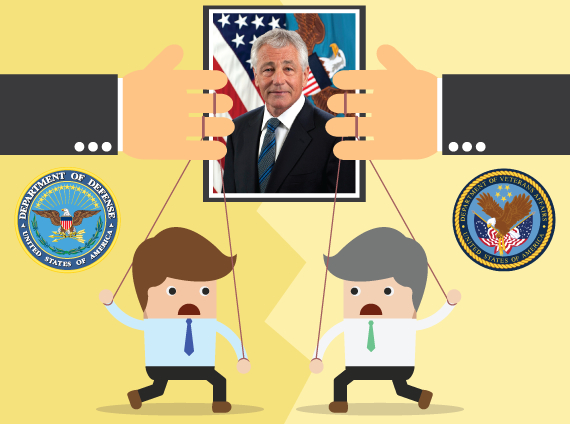 The Defense Department is poised to issue a final request for proposals later this month for an $11 billion contract to replace its outdated electronic health record system and provide urgently needed improvements in the data-sharing capabilities between DOD and the Department of Veterans Affairs.

The two agencies have spent the better part of the last decade trying to improve interoperability between their distinct electronic health records infrastructures. Between 2011 and 2013 alone, they spent more than half a billion dollars on an effort to develop a new joint-integrated EHR that could serve military personnel from enlistment through retirement and veteran status, only to see extreme bureaucratic infighting and turf battles derail the project.

Today, the agencies are moving down separate modernization paths, with DOD working on its Defense Healthcare Management System Modernization program (DHMSM) and VA planning commercial acquisitions for the next generation of its Veterans Integrated System Technology Architecture, known as VistA. But analysts, including one of the founding developers of VistA, point to years of missed opportunities for DOD to leverage what many consider to be superior existing capabilities in VA’s VistA system — an ecosystem of modular application components that in most cases have become industry standards (VA’s troubled scheduling system notwithstanding).

Thirty-six years ago, Tom Munnecke sat with a VA colleague at a table in Coffee Dan’s restaurant in Loma Linda, California, and sketched a diagram on a napkin. Although his drawing looked a lot like an onion, it was actually an architecture diagram for a computer network that would go on to fundamentally change the concept of electronic health records at VA for the next four decades. 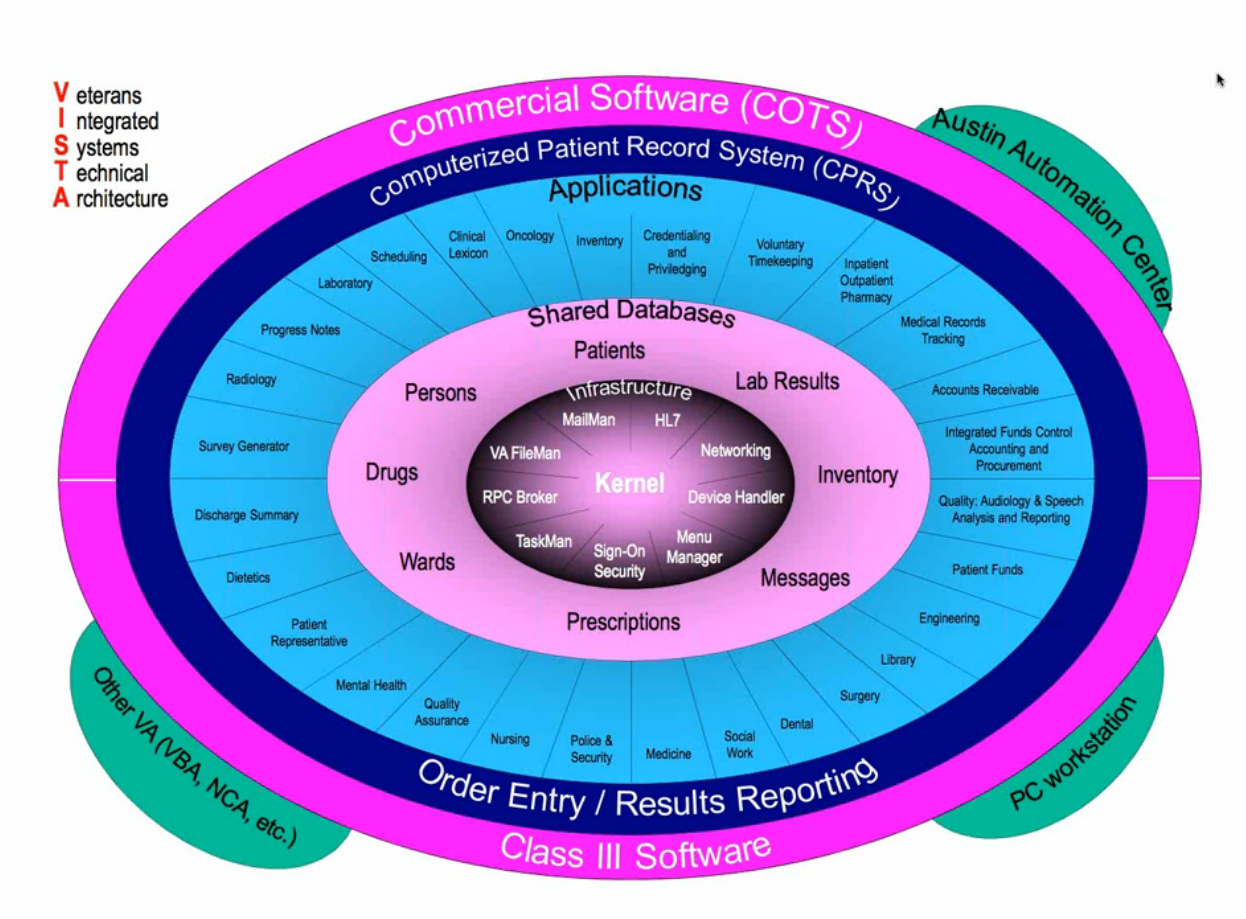 Known in the annals of VA IT development as the “onion diagram,” Munnecke’s architecture became the seed that would form what is known today as VistA. For the next four years, Munnecke worked as part of a small team of developers at VA known as the “Hardhats.” Their mission was to revolutionize VA’s electronic health record system by replacing the agency’s static mainframe-based architecture with an open, modular and decentralized electronic ecosystem. The effort would also prove to be a major cultural change for VA that the agency’s leadership wasn’t quite ready for.

“We went with minicomputers in the hospitals, but the centralists wanted to do a very top-down, hierarchical system with a big mainframe in Texas,” Munnecke said in an exclusive interview with FedScoop. “The original proposal was for one terminal per hospital. But we wanted to do hundreds of terminals per hospital. And we also wanted to tap into the creative energy of the VA staff. The depth of the medical bench in the VA is enormous and doctors are anxious to share their skills and knowledge. It developed a grassroots flavor.”

But the effort would not last long against a VA leadership structure unwilling to take risks. In 1979, VA disbanded the developers, firing the Hardhats (including Ted O’Neill, the visionary who had brought in the Massachusetts General Hospital Utility Multi-Programming System, the core computing language known as MUMPS, which remains at the heart of VistA today). But Munnecke and the other Hardhats continued their development work on an informal basis, working with hundreds of doctors and nurses to develop the tools they needed to manage VA’s growing medical records challenge. By 1981, the Hardhats had developed a toolkit known as the File Manager as well as the VistA Kernel, both of which supported a core system that could handle admissions, discharges, transfers, pharmacy dealings, scheduling and laboratory orders.

During the same year, when VA Chief Medical Director Donald Custis visited the Washington VA medical center, he was surprised to find hospital administrators and practitioners actively using the unauthorized software the Hardhats had developed. He was so surprised to find a working system, that he is quoted as saying “It looks like we have an underground railroad here.”

Chuck Hagel gets a pass

Munnecke moved quickly to leverage the Custis quote and adopted the “underground railroad” as a calling card for the unauthorized skunkworks software development his small cadre of VA coders had championed. In 1982, he organized the first Underground Railroad Banquet in Washington, D.C., to celebrate the accomplishments of the development team. There were many firsts to applaud, including the introduction of open source development, agile development practices, metadata-driven architectures, email-based messaging and even social media interactions. 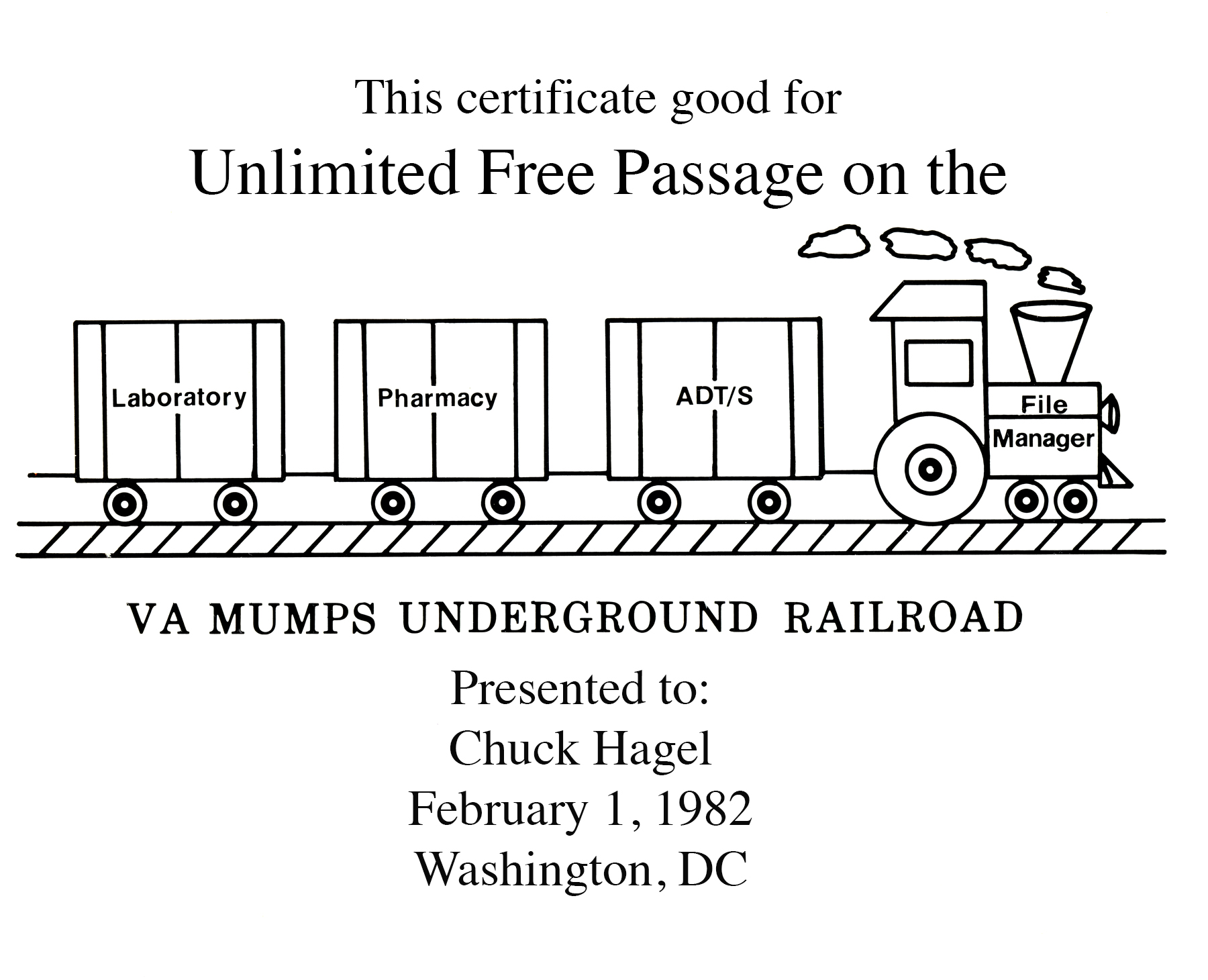 To get the message out, Munnecke began handing out business cards and certificates. One of his first certificates for “unlimited free passage on the VA MUMPS Underground Railroad” went to none other than Chuck Hagel, the then VA deputy administrator.

“Chuck played a key role in helping to evolve our early back room prototypes into a VA-wide electronic health record that has won many awards and accolades by physicians,” Munnecke said. Hagel is referred to by many of the original VistA developers as “one of the fathers of VistA.”

Less than two months after his confirmation as the nation’s 24th secretary of defense, Chuck Hagel found himself answering questions from lawmakers about the status of the Defense Department’s electronic health record development work and its ability to share information with VA and VistA.

“I’m not an expert on this issue, but when I was at the VA as deputy administrator in the Reagan administration in 1981 and 1982, I had something to do with actually implementing the first electronic health systems,” Hagel said. “I’m quickly out of my depth I recognize on this, but I have some knowledge of it and some experience and I know it’s difficult.”

“We have strong cooperation with VA on the interoperability, on the integrated records,” Kendall told reporters last year at the Pentagon. “We are not as much in agreement on the best way to modernize. Now, I should mention that VA has a very different situation than we do. Their business equation is fundamentally different than ours, because they already have the installed base of VistA and, as I mentioned earlier, they have the trained people and, if they modernize on the basis of the VistA system, they can evolve that and move forward that way.”

Munnecke noted the wry smile on Hagel’s face as he alluded to his personal role in promoting VistA when he was at VA. “I could tell he was aware of what was going on, but he didn’t want to tell Congress that he was part of an underground railroad,” Munnecke said. “He’s under a lot of political pressure and he’s got 12 advisers selling him one thing.”

Fork in the road

Just as fixing the problems with VA’s scheduling module in VistA is critical to solving VA’s patient backlog, data sharing in the form of an interoperable EHR is critical to DOD’s ability to create electronic medical documents that can be used for everything from treatment to claims processing throughout the entire span of a veteran’s career, from initial enlistment through either retirement or veteran status. The same holds true for veterans’ dependents.

But with so much on the line and high-profile attention from Capitol Hill, why would DOD and VA opt to create two separate modernization programs and all of the complexity that comes with managing concurrent data integration efforts? Some observers say this was an unavoidable outcome.

“This is a classic case of fiefdoms that don’t want to cede ownership or share in a meaningful way,” said Lloyd McCoy, a market intelligence analyst with McLean, Virginia-based immixGroup Inc. The technical issues of achieving true interoperability with VA can be overcome, McCoy said. But the “bureaucratic infighting and territorial wrangling” is another story altogether.

“The first thing they do is clash on bureaucratic turf,” Munnecke said. “Who’s winning and who’s going to lose by cooperating? And the concept of having a patient record that is shared independent of the organization chart is overlooked.”

According to Munnecke, the reluctance of DOD and VA officials to tackle interoperability in a serious way boils down to jobs, security and bureaucratic turf. “Between the DOD and VA, the party that cooperates most loses the most turf,” Munnecke said. “It’s always a bureaucratic crunch between org charts. But the information model doesn’t need to be coupled to the organization chart.”

FedScoop asked the Defense Department if Hagel could provide an explanation for his decision to move the department down a separate modernization and acquisition path rather than work more closely with VA to create a shared plan for an interoperable EHR — an approach specifically called for by the Government Accountability Office. Defense Department spokesperson Maureen Schumann said the department’s modernization and interoperability programs “are distinct efforts” and both have made significant progress. “We have been sharing data elements – in fact 1.5 million per day currently – and that effort will only improve,” Schumann said.

A fact sheet detailing DOD’s work with VA on the Interagency Program Office shows the bulk of the work to date has centered on agreeing to national interoperability standards and ensuring consistency in data terminology, content structure and exchange methods. A contract award for DOD’s new EHR is expected in 2016. However, the agencies’ decision to abandon the joint EHR initiative in favor of separate modernization efforts was not justified, according to a GAO report released in February.

“DOD and VA modernization efforts are moving farther apart,” Munnecke said. “I think it’s a manifestation of these two agencies not wanting to work together. The secretaries will say yes, but the bureaucrats whose turf is being impinged upon want to do their own thing, and they will find lots of ways of diverting things to specificities that inhibit information sharing and protect their turf.”

McCoy agreed with that sentiment. “As a taxpayer, I’m paying for two systems instead of one,” he said. DOD also has concerns about security and being able to access data in denied areas, particularly if the data were decoupled from specific organizational ownership as recommended by Munnecke.

“I wouldn’t say DOD is on board with that recommendation,” McCoy said. “DOD feels the way it is now is how it should be.” 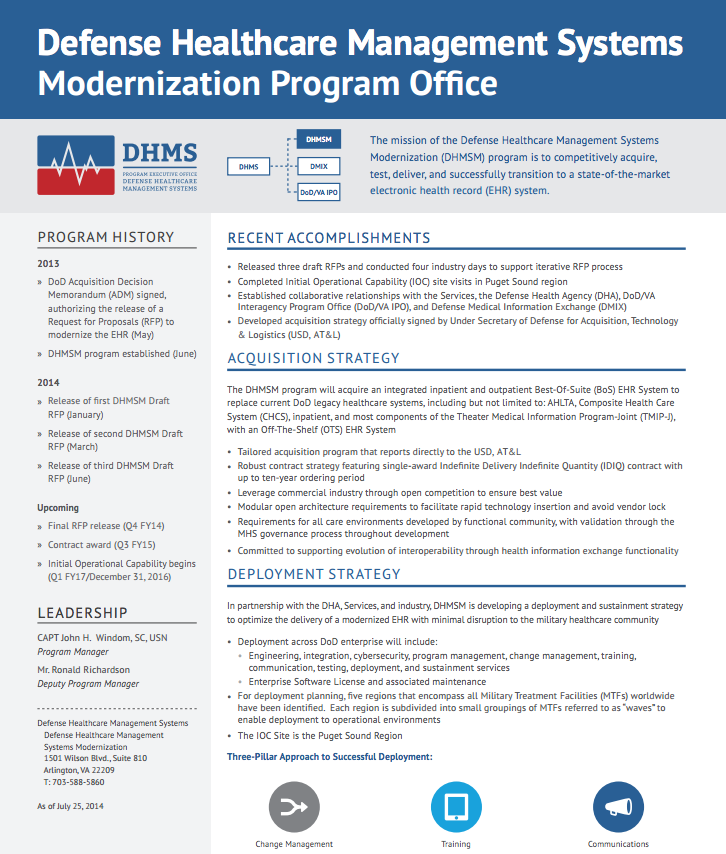