Over Labor Day weekend, I was finally able to catch up on some reading. One of the most fascinating books I came across was called “The Responsive City: Engaging Communities Through Data-Smart Governance” by Stephen Goldsmith and Susan Crawford. The two Harvard professors have deep backgrounds in using technology to govern and make governments more responsive. Goldsmith was the chair of the Corporation for National and Community Service and has penned several other books about technology in government. Crawford was a special assistant to the President for Science, Technology and Innovation Policy in 2009 and has also worked on Mayor Michael Bloomberg’s Advisory Council in New York. 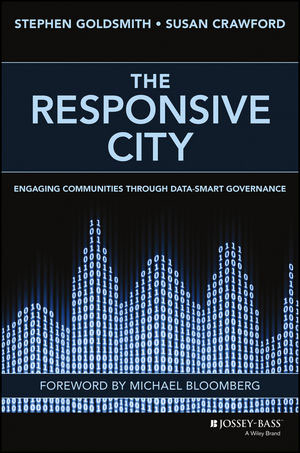 The book is full of case studies from places like New York City, Chicago and Boston, cities that have implemented interesting technological programs to improve the lives of their citizens. It’s aimed at mayors, city chief information officers and technology leaders who may be trying to improve their own cities, but it also makes a strong case that programs in those municipalities can become roadmaps for state and even national programs to follow.

I was able to track down Susan Crawford and interview her about her work on the book and her predictions for what the government and technology pairings of the near future will look like.

“I have really come to see cities as the most constructive petri dishes for developing technologies to enhance people’s lives,” Crawford said. “The challenges that cities face have never been greater, but so are the opportunities that new technologies can offer.”

Crawford said three major influences are quickly coming together, which along with exploding populations and popularity, will make cities the epicenter for government and technological innovation for the foreseeable future. First, there is much greater connectivity in cities and the bandwidth available within them continues to get even faster. Secondly, storage is getting cheaper, including light-weight options like cloud computing that could offer unlimited space. Finally, the computational power of both desktops and mobile devices are increasing to the point where government services within cities can be accessed from almost anywhere.

This has led to several success stories highlighted in the book. Crawford said her favorite is former Boston Mayor Thomas Menino’s implementation of a citizen 311 app that allows people to photograph problems like potholes or broken street lights and report them to the city from their mobile phones, plus track the progress being made on those complaints.

“That may seem primitive to some people used to doing everything with their phones, but this opened up a new channel of interaction between citizens and government that has been very popular in Boston,” Crawford said. That program has since been expanded to include city workers, allowing them to better plan their workloads and freeing them from returning to the office between every job.

Crawford said the two biggest government technologies that will be implemented and tested in cities in the coming years is predictive analysis and creating a holistic view of a city, almost like a living entity. Both of those will rely on data streaming in from multiple sources and will tax government’s ability to manage non-structured data sets. There will also be concerns about privacy, especially concerning predictive technologies and the use of sensors to monitor the public.

“I really see two opposing poles with privacy issues,” Crawford said. “At the one pole, you have the technocrats with their big dreams about how to use technology to better monitor and manage different aspects of a city. And then at the opposite end, you have lots of Americans who fear big data, predictive technologies and monitoring. They would do anything to try and prevent those dreams from becoming reality.”

Crawford said cities are in a better position than the federal government when it comes to implementing new ideas. The mayors of many big cities have great authority and even autonomy to fund and test out new programs without a lot of bureaucratic oversight. Even so, Crawford said cities like Chicago are doing the right thing by involving citizens in these new projects. Chicago recently built several data collection points around their Loop District that do everything from tracking cell phone data to map pedestrian movements and measuring air quality, light and noise levels.

Called The Array of Things, the program didn’t incite much fear or anger because all of the data collected is being put into an open source pool that can be accessed and shared by all. The city plans to enter into a discussion with its citizens centering around what data is appropriate to collect and the value that such information can have in increasing quality of life.

Programs like Boston’s 311 and Chicago’s Array of Things are perfect roadmaps for expanding similar programs to bigger venues that affect more people, but only cities are in a good position to be able to test them, Crawford said.

“In this era of austerity and despair and even fear of the federal government, people still love their cities, which makes programs like these easier to deploy,” Crawford said. “And we really do need to find the balance of policy and privacy like they are doing in Chicago. Programs like that will start in cities and then spread to states and eventually to the national level.”