Greetings to all my fellow techies. This week was a bit of a long one for me, as I attended two different trade shows and a government-focused event that kept me running in the red with little downtime. Early on, I was at the FOSE trade show, which shares space these days with GovSec. And then, it was over to the Challenge Festival, which was sponsored by the 1776 startup hub. 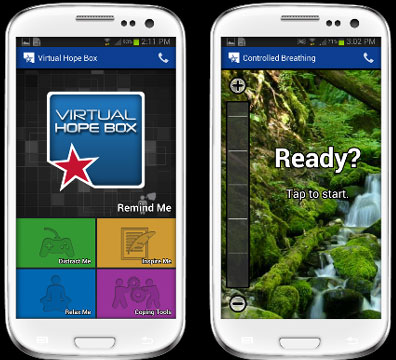 The Virtual Hope Box and a controlled breathing application both work to combat the effects of PTSD in a unique and easily accessible way.

After spending most of Saturday in a coma trying to recover, I wanted to reflect on some of the interesting and innovative companies and products that I experienced at the various shows. I even learned a few things.

One of the most interesting sessions for me this week was put on by IBM-owned Aspera. I’m not blind to the fact that this was basically a commercial for Aspera’s new On Demand service, but even so, it disseminated a lot of interesting information I bet many people didn’t know when it comes to cloud storage.

Files stored in the cloud are different than files stored on physical media, like disk drives or even network-attached storage devices. In the cloud, files are stored as objects, or perhaps blocks, while the nature of regular storage is more linear in nature, which is why defragmentation is needed from time to time.

The problem is that it takes time to change something from a linear storage medium to an object-oriented scheme. When you upload a terabyte-size file to the cloud, it has to be broken down into thousands of objects, a process which is neither fast nor efficient. Coupled with an inherent weakness of the TCP protocol, which was designed long before the cloud, companies are finding long slowdowns with big data uploads. TCP will throttle itself back, sacrificing speed for accuracy, and with too many barriers in the way, it means slow transfers to and from the cloud.

Aspera On Demand uses its fast and secure protocol to move files directly to object storage (into a cloud) as quickly as if it were being dropped into a NAS. It’s available to rent through Amazon Cloud Services by the hour or through Microsoft Azure as a full, always-on service.

Another company that really impressed me was tiag, which was showing the work it conducts with veterans suffering from post traumatic stress disorder. Working with the National Center for Telehealth & Technology, tiag helped to create several apps that can be installed on the phones of those suffering from PTSD.

I previewed two of those apps, which enable soldiers to mitigate panic- or depression-type attacks before they can build up into bigger problems. The first is called Breathe2Relax and is activated when a stressful situation happens. The sufferer launches the app and tells it what their current stress level is based on their anxiety and mood. The app then shows them the proper way to breathe in order to restore calm. The user simply has to match the breathing patterns.

The second app is called The Virtual Hope Box and is used to combat depression. When the user is feeling happy, they’re asked to store photos and other media into the app that represent their mood, like photos of their children or a special place that they like to visit. Then when they start to feel sad, they load the app and look at all the things that made them happy. In a way, it was sort of like a bank of happy things that can be added to when there was a surplus of good thoughts and then withdrawn from it when needed.

There was even a third app aimed at professional health care providers to help make sure they never lose their empathy. All of the apps were created with the input of psychologists, and all of them have been proven effective.

It was great to see technology being developed and employed to help those whom we all owe a debt of gratitude.

On the pure product side, I happen to be a huge fan of rugged gear — the kind of things that can meet or exceed the military’s tough MIL-STD-810G testing. I’ve seen a lot of notebooks, smartphones and gadgets that can stand up to harsh environmental forces, but what about a product group that has never really attempted it before?

A company called ioSafe was showing off their latest network-attached storage device, the NAS 1513+. When you think about it, an NAS stores so much data that its loss can be catastrophic for most organizations. But that’s not going to be an easy task with the 1513+.

The NAS comes encased in a suit of armor. It can survive being inside the heart of a 1,550 degree fire for 30 minutes. Or it can stay submerged under 10 feet of water for three days with no damage to the disks. And interestingly, ioSafe will provide up to $5,000 worth of data-recovery services when something happens. At the show, it had several models sitting there which had been through horrible fires, yet they all worked, which was kind of like a magic trick if you ask me. That seems like a pretty safe method of storing critical data without having to go to the cloud or financing some type of off-site location.

Those were just a tiny fraction of the amazing gadgets and gear I was able to test all week. It’s safe to say our country’s technological future is in good hands, pushed forward by its army of innovators who never seem to sleep.