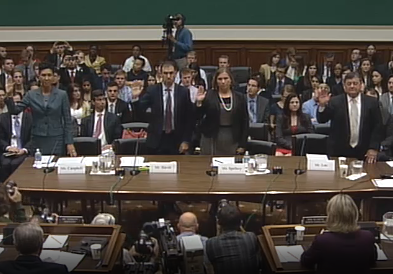 The panel takes the oath before testifying on healthcare.gov before the House Committee on Energy and Commerce on Oct. 24.

Representatives from the four main contractors involved with healthcare.gov were in the hot seat for 4.5 hours on Oct. 24, testifying before the House Energy and Commerce Committee on issues with the troubled site.

A point of contention throughout the hearing was that 40 days prior to Thursday’s hearing, the same group of people testified before the committee without reporting any issues.

If no problems were brought up, then why wasn’t the site launch successful? asked several committee members.

According to testimony from the September hearing, the Health and Human Services Department was doing an excellent job, said Rep. Diana DeGette, D-Colo.

At the time of that hearing, no end-to-end testing of the site had yet been conducted by the Centers for Medicare and Medicaid Services. Testing of the website occurred during the last two weeks of September, immediately before the Oct. 1 launch, according to Thursday’s hearing.

However, according to Andrew Slavitt, group executive vice president at QSSI, the industry standard for these types of operations is to conduct testing well in advance.

Slavitt said in this situation, “months would have been nice.”

CGI Federal Senior Vice President Cheryl Campbell agreed, saying “we would’ve loved to have had months prior to launch for testing.”

Slavitt said QSSI informed CMS more testing was necessary, and informed the agency that the portion of the site that had underwent testing was having issues.

Campbell had little to no knowledge of a website test conducted with health insurers and whether following that test insurers recommended to HHS or CMS the site was experiencing problems. She also testified CGI was not responsible for end-to-end testing: CGI tested its portion of the site “throughout the process” and each component did its own separate testing.

Campbell wouldn’t acknowledge if her firm had faced issues with the site in its entirety, and said CGI was not in a position to voice those concerns to CMS or HHS if it did in fact uncover issues with the integrated site.

Committee Chairman Fred Upton, R-Mich., asked if delaying the launch was an ever an option. He was met with silence.

The decision the site would go live Oct. 1 lied solely with CMS, according to testimony from the panel.

The panel reiterated the site is still functional, with CGI and QSSI continuing to make fixes as problems arise and the system is improving every day.

Only a few escaped the committee’s grilling. Lynn Spellecy, corporate counsel at Equifax Workforce Solutions, and Serco Program John Lau made it through the hearing unscathed as most questions were directed at Campbell and Slavitt.

HHS Secretary Kathleen Sebelius is expected to testify before the committee next week.

by Sara Wilson • 19 hours ago
Tech