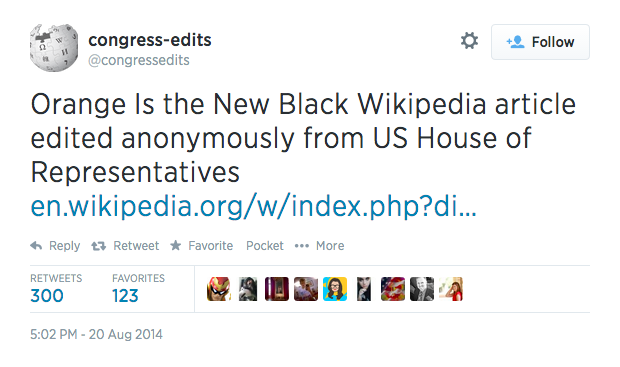 This summer has been filled with tales of odd, and at times shameful, Wikipedia edits coming from congressional IP addresses thanks to the recently created @congressedits Twitter bot that automatically tweets any anonymous edits generated from the congressional network. While the tool creates aversion for those on Capitol Hill in participating as editors, many Wikipedia and transparency advocates are stressing the importance of the staffers continuing to lend their knowledge.

“Most press coverage of CongressEdits has focused on acts of vandalism, and one would think we would want to chase Congressional staff away,” wrote Wikimedia DC President James Hare and Treasurer Peter Meyer. “In fact, Wikimedia DC welcomes edits by Congressional staff and the staffs of federal government agencies. Government staff are experts in areas of public interest, including very new hot topics. They play a promising role in our mission to make a better online reference work, with notable, neutrally phrased, verifiable content. We can overlook minor discretions and work with Capitol Hill and all federal employees to forge a path forward.”

Those “acts of vandalism” were more newsworthy not because they were disruptive or hate-induced — “they are mostly the kind of juvenile or disruptive edits that Wikipedia deals with every minute of every day without incident,” the blog post said — but rather because they came from within Congress. Some even led to the banning of congressional IP addresses from Wikipedia use.

That edit led to the the IP address being banned for a third time this summer alone. The alleged editor responded to public outrage saying, “There’s nothing illegal about editing Wikipedia to promote official business that has been explicitly authourized [sic] by the Representative.”

But while Wikipedia can be used as a pot to stir controversy, as seen in the above example, it can also be used as a major educational tool to connect Congress to the American public on major issues on Capitol Hill. According to the Cato Insitute, which recently partnered with Wikimedia DC to host a panel on congressional edits to Wikipedia, in a 90-day period there were about 400,000 hits on Wikipedia pages about bills pending in Congress.

“What’s notable though is the people most knowledgeable about bills pending in Congress, the congressional staff, have an aversion to this,” said John Maniscalco, director of congressional affairs at the Cato Institute, during that panel. “So the people who work with members, who work with Ledge Counsel, who work with [Congressional Research Service] are largely not editing the website that a large segment of the American population use to get information about bills pending in Congress. So what we have here is a huge manner in which government can deliver transparency.”

Both Cato and Wikimedia DC assert that with care and understanding from both congressional staffers and the Wikipedia community, the website can grow to be an even bigger tool for open government. Specifically, Wikimedia DC offered the following best practices:

“There’s aversion on Capitol Hill to editing Wikipedia, and I think there’s some distrust among the Wikipedia community for edits coming from Congress,” said Jim Harper, senior fellow with the Cato Institute. “But with work and with care, I think we can improve that situation markedly and improve the information that’s available to the American people about what happens here.”