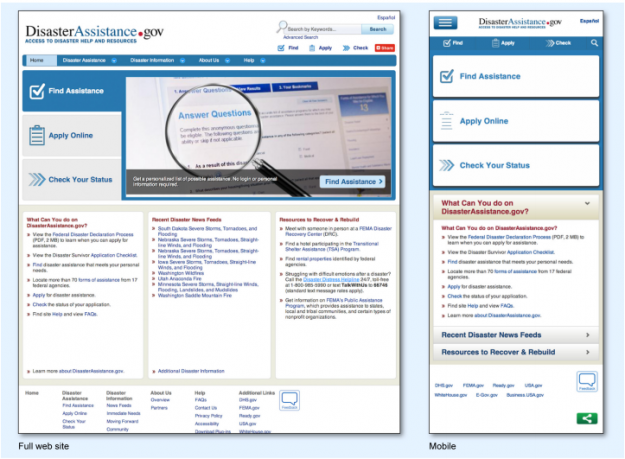 Despite evidence that mobile device use is surging, a new Government Accountability Office report found that most Americans visiting agency websites still do so through a laptop or desktop computer.

GAO surveyed six agencies of varying size — the departments of Interior and Transportation, the Federal Emergency Management Agency, the Federal Maritime Commission, National Endowment for the Arts and the National Weather Service — on how users consume their Web-hosted information. The report, addressed to General Services Administration Administrator Dan Tangherlini, found that between 82 and 94 percent of visitors still accessed the agencies’ websites with a laptop or desktop. In some cases, less than 10 percent of users accessed the websites on mobile phones and even less used tablets.

That said, those percentages of mobile and tablet use, though small, are trending in a positive direction.

“For example, the number of visitors using smartphones and tablets to access NEA information and services — such as applying for grants and tracking grant applications — increased from 3,376 in 2010 to 287,932 in 2013,” Mark Goldstein, GAO’s director of physical infrastructure, wrote in the report. “Similarly, individuals using smartphones and tablets to access DOI’s information increased from 57,428 in 2011 to 1,206,959 in 2013. Among the selected agencies, FEMA had the highest number of visitors who accessed its services using a smartphone and tablet (3.1 million visitors in 2013) followed by DOI, which received approximately 1.2 million visitors who accessed its main website via a smartphone or tablet.”

A FEMA official explained to Goldstein that the agency prioritizes mobile accessibility, as its mission to serve Americans during and after times of disaster often correlates with limited Internet access, and survivors often must use cellular devices.

Federal websites are inherently information heavy and in many cases weren’t built with the end user in mind, GAO reported, which may make it difficult to visit them on a small screen. However, many agencies are taking measures to improve their mobile services, particularly the 24 CFO Act agencies required to do so by the Office of Management and Budget’s 2012 Digital Government Strategy. OMB also released the Digital Services Playbook last year to help agencies improve their digital services.

“All 24 agencies required to comply with provisions of the Digital Government Strategy have made efforts to improve their digital services for those who use mobile devices,” the report says, and 21 of those agencies have enhanced two or more services. All six of the agencies studied in GAO’s report, with the exception of Federal Maritime Commission, have taken steps to make their mobile websites better, whether it be making their design more responsive or creating mobile applications.

GSA is also helping agencies get with the mobile times. The agency’s Office of Citizen Services and Innovative Technology has taken on several initiatives to assist mobile laggards in the federal government, such as creating the DigitalGov.gov website, establishing the Federal Mobile Apps Registry, and offering training and best practices on how agencies can enhance their websites or mobile apps.

Not all agencies are taking GSA’s helping hand, though, GAO found. Of the six studied in this report, just three agencies told GAO “that OMB’s and GSA’s actions have helped their efforts to enhance their digital services.” The other three didn’t need any help with their mobile services. In FMC’s case, it was too small to focus that much attention to improving mobile accessibility.