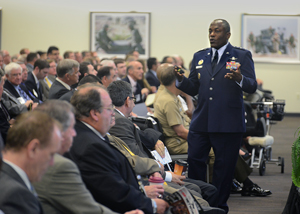 The death knell for the landline phone has been tolling for years; the number of American households with the increasingly retro device has fallen to post-World War II levels.

But at the Defense Information Systems Agency, eliminating the hard-wired device is not so simple. Every move from terrestrial to intangible technology (Wi-Fi, cloud, etc.), creates myriad security concerns. Even employees cannot bring non-government-issued electronic devices into the building. Still, senior DISA officials insist they are committed to almost eliminating the landline phone within DISA — and then the entire Defense Department — in the coming years. It’s a huge shift; 99 percent of DOD employees still use a “hard phone,” or landline, in some capacity. DISA officials want to reduce that usage to 20 percent.

“The big change for us in the department is that instead of giving you a desk with a telephone and a computer screen, we can give you either a tablet or a computer with a telephone application as part of your software load,” said Cindy Moran, director of DISA’s network services directorate. “[The phone] just becomes an application on your computer instead of handing you a suitcase of different devices to do work that can all be done on your computer.”

A computer application serving as a phone — how the “phone” on every smartphone works — is known as a “softphone.” At DOD, it’s one of the biggest barriers to a truly mobile work experience.

“Wherever you take your computing environment — whether it’s an iPad, a laptop or whatever — you’re bringing not only your desktop, but also the communications aspect of your desktop with you all as one integrated capability,” said David Bennett, DISA chief information officer.

Traditionally, DOD — and all government agencies — has communicated internally through time-division multiplexing, or TDM, the classic business phone system. Everyone gets their own extension, calls are connected through circuit switches. In the private industry, the move to voice over Internet protocol, or VoIP — where calls are connected over an Internet connection — is long underway. And Friday, during a presentation at DISA’s Forecast to Industry conference, Carter outlined DISA’s goal to transition all of its voice and video capabilities to VoIP.

The move will pave the way for the impending transition to softphones and the anticipated mobile office.

“So, if I want to be able to talk to somebody but I don’t know where they’re at, the capability basically hunts you down and finds you and gives you the ability to interact,” Bennett said.

The change is part of DOD’s overarching goal to get its technologies operating within a joint information environment — where every device can access all of the department’s information anywhere. But it’s as much about fitting into the department’s forward-thinking ideology as it is about cost savings. From installation ($300 to $500 for hard phones versus $50 to license softphone technology — and from the same vendors, no less) to ongoing service costs ($50 to move a hard phone to a new office versus $3 to $5 to reprogram a softphone), softphones are cheaper on the front- and back-end.

The potential savings across DOD are hard to calculate, Moran said, because each military service handles its budget a little differently — “But it is significant.”

DISA currently has about 200 people (of 7,691) using softphones, Moran said. And 150 more are in a pilot program testing a mobile device that integrates all of the formerly disparate capabilities — voice, video, email, etc. — Bennett added.

“I’m getting ready to scale it up to 2,000 with the intent of taking it across the enterprise,” he said. “I can now start to drive, from an agency perspective, an integrated set of capabilities and start recovering the costs on the back-end, so I don’t have to sustain physical devices in perpetuity.”

by Billy Mitchell • 10 hours ago
Acquisition