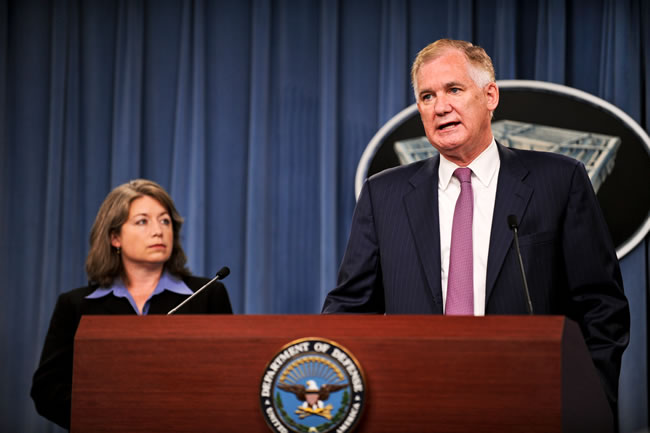 The Department of Defense released its first Operational Energy Strategy yesterday that lays out the department’s energy goals – primarily those dealing with assisting the warfighter – during a press conference at the Pentagon.

“Napoleon once said that an army marches on its stomach,” Burke said. “And you might say our military marches on batteries and fuel tanks.  It’s not new that logisticians are the unsung heroes of the battle – of the battlefield. But the amount of energy we consume is new, down to the individual soldier, sailor, airman and Marine. And while the department has long looked to improve on energy use in military facilities … it is new for the department to consider energy as a war fighting capability, something we can change for strategic advantage rather than just provide.”

Lynn said DoD accounts for 80 percent of the federal government’s energy use and about one percent of the total consumption nationwide. Last year, the department spent $15 billion of which about $13 billion went toward the military operations.

In total, the department is spending 225 percent more on gasoline (it purchased about five million gallons last year) than a decade ago, Lynn said.

“As conflicts become longer in duration and more expeditionary in nature, the amount of fuel it takes to keep forces in the field has become a significant vulnerability,” Lynn said. “Taken together, the risks and costs associated with our energy use mean that we must change the way we manage energy on the battlefield and strive to reduce demand at all levels of our forces. Addressing this challenge is the goal of our operational energy strategy.”

He continued, “In short, DOD needs to address energy needs as a broad military challenge. Supply is limited, cost is increasing. And with the changing nature of war, our current energy technology is not optimized for the battlefield of today or tomorrow.”

Burke said her office will release an implementation plan with more specific objectives and timelines within 90 days. This January, she said she will submit a memo to the secretary of defense certifying or de-certifying the defense budget for how well it meets the strategy.

“So I do believe … we’ll have a payback within just months,” Burke said. “The primary goal is to improve capabilities. But in many cases, we also will begin to save money within a matter of months … And I think that we have a great track record as a department of being an innovation pull for solving our problems, and that this is a case where it’s the same, where we have some very specific needs and some specific requirements that will help us get our jobs done and that’ll be a powerful pull for industry.”