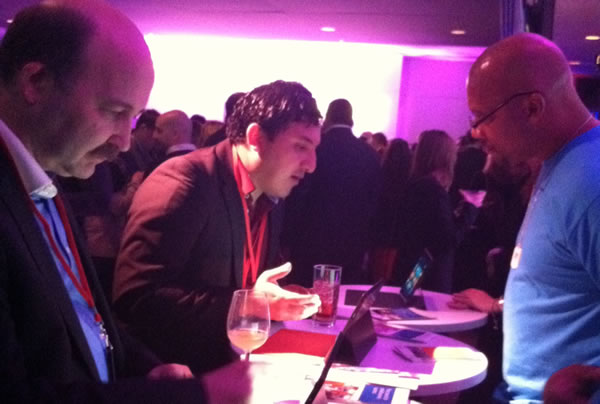 Party guests get the latest election results on Surface tablets at an election party hosted by Politco and Bing (Photo: Patra Wroten)

Mini-tacos were passed. Mega-martinis were poured. With panoramic views of the Capitol and the Washington Monument, a crowd of more than 650 mixed and mingled at The Newseum Tuesday night inside Washington’s biggest election night party, hosted by Politico and Bing. Party guests kept one eye on the passed appetizers and the other … on the Internet.

Interactive “election centers” were stationed around the celebration that spilled into three large rooms. A Microsoft tech team roamed the crowds with the new Surface tablet letting party-goers peek at the latest poll numbers on Microsoft’s latest gadget. Poll-watchers traded stories about how long they waiting in line to vote in D.C. and Virginia while trading texts and tweets with friends wrapping up campaign work in battleground states.

Not unlike most Washington crowds, this one was serious about the results, though in between the commentary of the live C-SPAN broadcast Politico reporters anchored from the event, guests sipped Johnny Walker from a whiskey bar and lined up to swipe “Bing It On” and “Politico Punch” cocktails.

The crowd cheered when Ohio went to President Obama. Party guests had one hand raised to toast the end of the election and the other hand ready to load the latest tweets.