Editor’s Note: This story was updated Dec. 2 to reflect breaking news of President Obama’s decision to nominate Ashton Carter to be the next secretary of Defense.

News trickled out of the White House and Capitol Hill Tuesday morning that President Obama plans to nominate former Pentagon official Ashton Carter to replace Chuck Hagel as Defense secretary. But Carter’s confirmation is unlikely to have an impact on the Defense Innovation Initiative or the third offset strategy — both of which are being led by Robert Work, the No. 2 official at the Pentagon and an enterprise visionary who’s played a key role in the military’s postwar transition strategies. 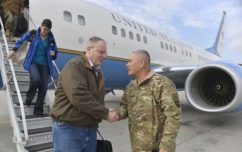 Although Work has only been in the No. 2 position at the Pentagon for six months, the former undersecretary of the Navy has championed a vision for a Defense Department that is more technologically agile and globally engaged beyond the Gordian knot that is Middle Eastern tribal hatreds. FedScoop recently got the opportunity to question Work about his vision for maintaining the U.S. military’s battlefield advantage. And that vision is centered squarely in the ongoing rebalance to the Asia-Pacific region and the growing importance of cyberspace to military operations.

“As a Pacific nation, the United States has long-standing commitments and ties in the Asia-Pacific region. And we face an increasingly complex security environment in this part of the world, with challenges that include the rise of new powers, growing North Korean ballistic missile capabilities, maritime disputes and widespread natural disasters,” Work said. “The Asia-Pacific is a region of ever-increasing importance and a growing focus for the entire U.S. government, as reflected in the president’s strategy of rebalancing our political, economic, and military engagements in the region. The Department of Defense has committed to ensuring our finest and newest capabilities will go to the Asia-Pacific region first,” he said referring specifically to capabilities like the new F-35s, tilt rotor Ospreys, Littoral Combat Ship and the TPY-2 missile defense radar.

“We’ve also taken steps to enhance our defense posture through rebalancing our air and naval assets toward the Pacific and adding new rotational deployments to Australia, Singapore and the Philippines,” Work told Fedscoop. “I recently traveled to the region in August and can personally attest that we are very much welcome as a resident Pacific power, and we intend to remain one. As the department continues to develop innovative technologies and new concepts of operation, we are continuously working to ensure these capabilities are suited to address the full change of challenges we face in the Asia-Pacific region.”

Those new technologies and operational concepts are the central focus of the Pentagon’s third major offset strategy, which Work is spearheading at the request of Hagel. At the heart of that strategy is the Defense Innovation Initiative, a high-tech re-tooling effort unveiled Nov. 15 to ensure U.S. forces can maintain their technological superiority against China, Russia and other potential adversaries who have been investing heavily in capabilities specifically designed to counter areas where the U.S. currently dominates. The ink on Hagel’s innovation memorandum was barely dry when Work began to take the message public.

“We’ve ridden the Cold War strategy of fielding conventional forces with the ability to hit anything they aim at to the point where potential adversaries are now beginning to develop similar capabilities to match U.S. forces,” Work said, speaking Nov. 19 at a defense industry conference in Washington, D.C. “The whole idea of the third offset is how do you get your head around that? It is an operational problem that is central to our ability to project power. Part of the third offset will be to try to identify the key technologies that we think will give us a particular operational advantage. DOD will need to be able to operate at greater range, and with more stealth. And will have to be able to defend against the emerging targeting capabilities of adversaries,” he said. 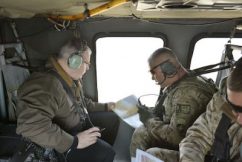 But Work acknowledged there will be difficulties and challenges associated with the new offset strategy that previous strategies did not have to worry about. From the space race of the 1960s through the stealth and microelectronics revolutions of the 1970s and the large-scale systems engineering of the 1980s, the U.S. military had few, if any, peer competitors to worry about. The current offset strategy, however, forces the Pentagon to pursue innovations and technologies that can be easily replicated quickly around the world. “One of the things we’re looking for is demonstrations, as well as prototyping for rapid fielding to avoid losing ground to near-peer competitors,” Work said in November. “Maybe … it’s biotechnology, maybe it’s robotics. Maybe it is doing very small systems that we can generate distributed effects at scale. We are also reinvigorating war gaming, which has really, really gone down over the last 12 years.”

The Pentagon will be looking to the private sector for most of the game-changing technological breakthroughs. And while the conceptual framework and the specific research and development programs are still in their infancy, Work acknowledged to Fedscoop that cyberspace and cyberforce development remain common threads throughout.

“We are deployed across the world and continue to address a range of contingencies and unpredictable crises,” said Work. “That means we must face the rise of new technologies, national powers and nonstate actors; sophisticated, deadly and often asymmetric emerging threats ranging from cyberattacks to transnational criminal networks; as well as persistent, volatile threats we have faced for years.”

In the 1990s, the U.S. military enjoyed conventional dominance across the spectrum of conflict, Work said. “Our global command and control network was not under the threat of cyber attack. Our space assets, which provided us with global command and control and the ability to set up theater-guided munition battle networks, weren’t threatened. We enjoyed freedom of access on land, in the air, and on the seas.” But that dominance is no longer guaranteed, said Work. “Today, our potential challengers are investing heavily in capabilities and weapons that challenge us in all of the domains. That puts our space assets at risk and our global command and control system at risk also,” he said. “So, our technological dominance is no longer assured. The department must sustain and expand our advantages as we deal with limited resources. The innovation initiative is a departmentwide effort to identify and invest in innovative ways to sustain and advance our military dominance for the 21st century. Cyber is an important part of that.”