The Federal Aviation Administration will miss its September 2015 deadline to integrate unmanned aircraft systems into American skies due to significant technological, regulatory and privacy barriers preventing the safe integration of UAS into the national airspace system, according to an audit report from the agency’s Inspector General’s office.

“Following many years of working with industry, FAA has not reached consensus on standards for technology that would enable UAS to detect and avoid other aircraft and ensure reliable data links between ground stations and the unmanned aircraft they control,” the report said. “FAA has not established a regulatory framework for UAS integration, such as aircraft certification requirements, standard air traffic procedures for safely managing UAS with manned aircraft, or an adequate controller training program for managing UAS.”

In preparation for the deadline, the FAA published a five-year roadmap for UAS integration and selected sites to establish test ranges for UAS. Although the 2015 deadline is more than a year away, the IG report said despite the FAA’s progress, the agency is significantly behind schedule.

Notional depiction of how unmanned aircraft would be integrated into the national airspace system. (Source: FAA OIG)

According to provisions from the 2012 FAA Modernization and Reform Act, the agency is supposed to develop a process to share any safety incidents with the Defense Department, which has the largest UAS fleet. However, the IG found that FAA is not effectively collecting and analyzing UAS safety data to identify risks. Although the agency did establish an integration office specifically for UAS it has yet to establish clear lines of reporting or guidance within the office’s leadership structure.

The FAA has completed 9 of the 17 provisions established for UAS, the report said, and will not meet the August 2014 deadline to issue a final rule on small UAS operations — which would establish criteria for aircraft lighter than 55 pounds operated below 400 feet and within line-of-sight.

The report said many technologies, like collision detection and avoidance systems and other measures to avoid “lost link” scenarios in mid-flight, are still not in place for safe flight. The report referenced an August 2010 event where a Navy-operated UAS helicopter lost contact with its ground operators and flew into restricted airspace over Washington, D.C.

The delay in integration isn’t just about missing a congressionally-set deadline. It also has economic ramifications, according to Melanie Hinton, the senior communications manager for the Association for Unmanned Vehicle Systems International.

“A delay in the integration process would not only hold up the development of this technology, but would result in more than $27 million in lost economic potential for each day that integration is delayed,” Hinton said in an email statement to FedScoop. “Industries from agriculture to real estate are interested in using this technology, and delaying integration would deny them a technology that would help to save time, save money and save lives.”

Meghan McCormick, a spokesperson for Boeing, said the company remains supportive of FAA’s “efforts to establish safety standards for unmanned systems.” Last year, the FAA granted Boeing a restricted category certification for commercial operations of its Insitu ScanEagle UAS, making it the first-ever unmanned aircraft certified for commercial beyond visual range operations in the United States. That event marked “a fundamental milestone in the planned integration of unmanned aircraft systems (UAS) into national airspace by 2015,” McCormick said in an email.

Last month, the National Park Service temporarily banned UAS from all National Parks unless operators go through an application process. Earlier in the month, the Motion Picture Association of America applied for an exemption under FAA regulations to allow film studios to use UAS for filming, and the FAA also allowed the use of drones by BP in Alaska to monitor activity on pipelines.

“While it is certain that FAA will accommodate UAS operations at limited locations, it is uncertain when and if full integration of UAS into the NAS will occur,” the report said. 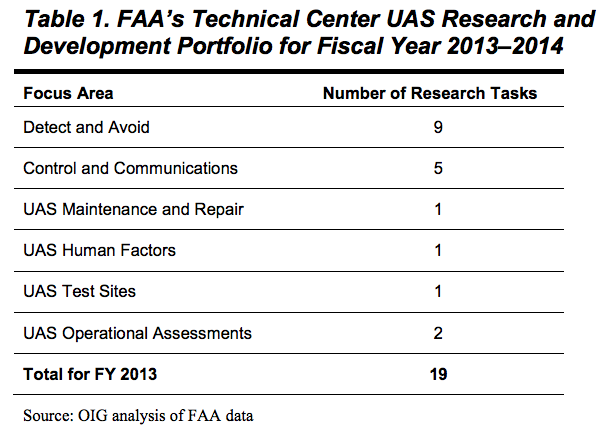 by Jackson Barnett • 14 hours ago
Defense