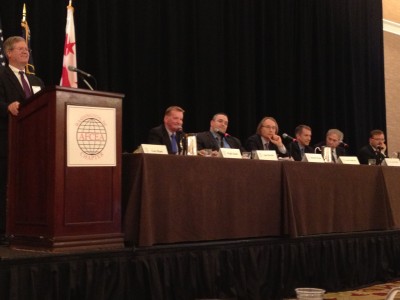 Panelists discussed how to leverage technology in the federal government, at the 2013 Emerging Technologies Symposium. (Photo: Colby Hochmuth)

The Armed Forces Communications & Electronics Association hosted the Emerging Technologies Symposium at the Omni Shoreham Hotel in Washington, D.C., drawing individuals from the public and private sectors to talk tech.

The final panel concluded the day’s talks on big data, cloud computing and cybersecurity, with a discussion on emerging technologies through the eyes of the CTO.

Federal shortcomings, the panel agreed, can be solved through collaboration of the public and private sectors.

Panel moderator Ira Hunt, CIA CTO, said the actions of the federal government could be viewed as “insanity.”

“We do the same thing over and over, and expect different results,” Hunt said. “Isn’t that the definition of insanity?”

Consulting the private sector is especially important at DHS’ Customs and Border Protection, according to Wolf Tombe, CBP CTO.

“We should look to the industry to see what’s practices are out there and what works,” he said. “And we need to look and innovation and best practices, and see how we can best leverage what’s already been done.”

Terry Pierce, special adviser for disruptive innovations at DHS’ Center of Innovation, also said government reaching out to the industry folks is already happening, and a reason why events such as the Emerging Technologies Symposium are so important.

The panelists also discussed big data and how it can be used to the government’s advantage.

“The global Internet desperately needs a clean in its hygiene,” said Richard Struse, chief advanced technology officer at DHS. “By leveraging the global censor network, we’ll be able to share information in machine speed, and be able to eliminate some of that extra noise.”

The panel admitted there is a long way to go, and Air Force CTO Frank Lonieczny joked, “We all know government isn’t particularly good at adapting to change.”