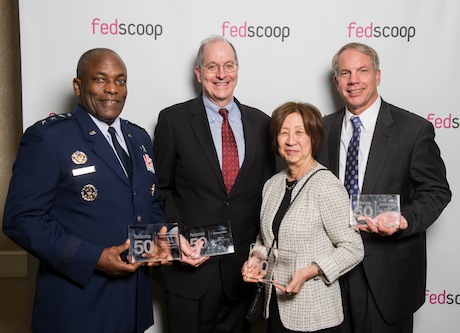 It was an evening of celebration as Washington’s technology leaders gathered Nov. 21 to honor the extraordinary contributions of the federal IT community.

The FedScoop 50 Awards recognize the achievements of 50 of the federal IT community’s best and brightest minds and innovators. This year, hundreds of individuals and programs were nominated, and more than 20,000 votes were cast.

For individuals to have been considered, accomplishments should have occurred between Oct. 1, 2012 and Oct. 1 , 2013. Nominated programs must have been current government programs.

“We had an amazing group of FedScoop 50 winners this year; these individuals are all making extraordinary contributions to our community and country,” said FedScoop CEO Goldy Kamali. “The FedScoop 50 celebration is an opportunity to recognize and give thanks to 50 of the top leaders in government and industry who are working tirelessly to make big things happen.”

Federal Innovation of the Year

Fed IT Program of the Year

Government Up and Comer

Most Inspiring NewComer to Watch

Tech Champion of the Year