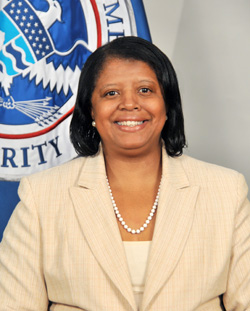 Garrison-Alexander is implementing an IT roadmap that will consolidate the agency’s IT fully into the office of the CIO to create a more centralized approach that falls in line with other TSA initiatives around the same area.

“That is my top priority right now,” said Garrison-Alexander who will join FedScoop for the McAfee Public Sector Summit at the Pentagon City Ritz on April 11, where she will take part on a panel with State Department Deputy Director for Information Assurance Gary Galloway, NIST Senior Computer Scientist Ron Ross and McAfee Director of Federal Business Development Tom Conway.

Along with the IT reorganization, Garrison-Alexander said she is looking into adding mobile capabilities for the agency’s massive 65,000-person workforce spread across more than 450 airports nationwide and 21 international locations.

She said she is looking at the security constraints of consumer devices to see if they have the security levels to provide enough assurance to protect TSA’s networks and data.

“We have some pilot programs underway that test mobility from the agency’s leadership to the lowest levels of the agency to deliver use cases for future projects,” Garrison-Alexander said.

She is also in the midst of a data center migration and consolidation project, something she says the Department of Homeland Security was ahead of the curve on. TSA has already moved two of its data centers into DHS facilities and consolidated a third, all to help the agency be more efficient along with making various services available across the department to achieve a common infrastructure.

As for pet projects, Garrison-Alexander said she wishes she had time for some, but does have the re-compete for the Oasis II contract coming up this year.

by Dave Nyczepir • 10 mins ago
Tech