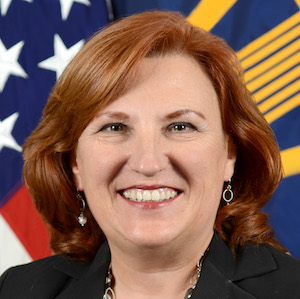 One of the leading cybersecurity personnel in the Pentagon, Marianne Bailey has been instrumental in driving the charge to ensure the Defense Department has a well-defined and well-executed cybersecurity program. More specifically, her team has worked on the response to the Office of Personnel Management breach that shocked the federal government in 2015. Of the 2.1 million people whose personnel records were obtained from one of the two systems breached, 80 percent of those were DOD employees, Bailey said. “Working that response and the development of a new system to handle this information in the future consumed many, many months of working groups from the very technical all the way to Congress and the White House. You never understand the significant resource drain and all the aspects of responding to a breach until you are involved in one.”

What would you say to young women who are thinking about a career in technology
or related fields, or just starting out in their careers? What’s the best advice you could offer for success?

It is a great field to be in. You have an opportunity to really make a difference for our country. Technology is in everything we have today. Whether we are speaking about iPads, cars,
refrigerators, cell phones, 3D organ printing, etc. The possibilities are limitless. You could invent something that could save or better millions of lives. Women are very well respected today and so the issues that women my age had to address are pretty much nonexistent. I have spoken to women who struggle with the work commitment and they also want to have a family. They want it all. Well so did I and it worked out wonderful. It may be a little more hectic, requiring agility and scheduling. Statistics have shown employees who have a good work life balance make the best employees. My experience validates that fact.

What/who inspired you to get into your field of work?

Three people inspired me. First my father who told me at least a thousand times that I could do anything I wanted. And I believed him. Second, I grew up in a very blue-collar school. The percentage of students that went on to college was pretty low. My high school physics teacher did two things. First he was really hard and I fought for a C one semester. It got my attention and I had to actually work at this course. I found passion for probably the first time when it came to school. Second he made each of us write a research paper — pick five majors, pick five colleges that offer that major, describe the jobs who could have and tell me the pros and cons of the college. This was so valuable to me because it was the first time i thought about what I really wanted to do. Third, my oldest brother is an engineer, and so I had some footsteps to follow.

Why is it important to you to empower women and other minorities to join more technical and technology-related fields?

I have worked with many, many brilliant women and minorities. They can offer so much to the country in a time when we desperately need more people in the technology fields. It is a great opportunity. The ability to move around and try your hand at different technologies, industry, government, education. Whatever their passion they will have the opportunity to work on cutting edge research and development. Today there is not a field that technology does not touch.