Fiscal year 2015 begins the largest transformation in U.S. military force structure since the end of the Cold War. And while almost all of the attention at the moment is on the Obama administration’s 2015 defense budget, released March 4, it is important to remember military spending levels are only one of many factors that contribute to overall military power.

Because so many of the critical changes (positive and negative) get lost in the heated, politically charged rhetoric that follows the release of transformational budget proposals, FedScoop has prepared an overview of the important mega trends contained in the Pentagon’s fiscal 2015 budget request, and a look at where these trends fit in the overall national military strategy.

The terrorist attacks of Sept. 11, 2001, led to a prolonged and significant increase in U.S. military spending. Discretionary spending for the Defense Department in 2001 was $287 billion. By 2012, discretionary spending had climbed to $530 billion, not including the costs of the wars in Iraq and Afghanistan, which totaled $115.5 billion that year.

The fiscal 2012 budget was the first budget to feel the impact of the Budget Control Act of 2011, which capped spending through 2021. The Pentagon has already absorbed a $37 billion mandatory cut on top of a 10-year, $487 billion reduction as called for by the BCA.

The reality now facing the Pentagon is rather simple to understand. The nation is entering a time frame when it will no longer be fighting and paying for (in both blood and treasure) two major wars. In short, the war machine has been running at full power for more than a decade and has to be turned off and retooled.

In addition, the latest Quadrennial Defense Review — the Pentagon’s four-year strategy outlook — makes clear the military of tomorrow will not be staffed and equipped to be able to fight and win in two major regional wars, such as Iraq and Afghanistan. The new strategy calls for the ability to fight and win in one contingency, and “imposing unacceptable costs … on a second aggressor in another region.”

Given the fiscal realities and the strategic assumptions laid out in the QDR, DOD is moving forward with an aggressive plan to rebuild a much smaller, but much more flexible and capable military — a military with a decisive technological edge.

A smaller force will also enable the department to better control personnel costs, such as pay and benefits, and to redirect those and other savings, such as savings from base closures and phasing out old weapons systems, to modernization, training and readiness.

How DOD plans to do that

The Pentagon’s fiscal 2015 budget request calls for $495.6 billion in budget authority, which would grow by 3 percent a year through 2019 to roughly $559 billion. In constant FY2013 dollars, this would put Pentagon spending on par with the defense spending of the mid-1980s at the height of the Cold War. 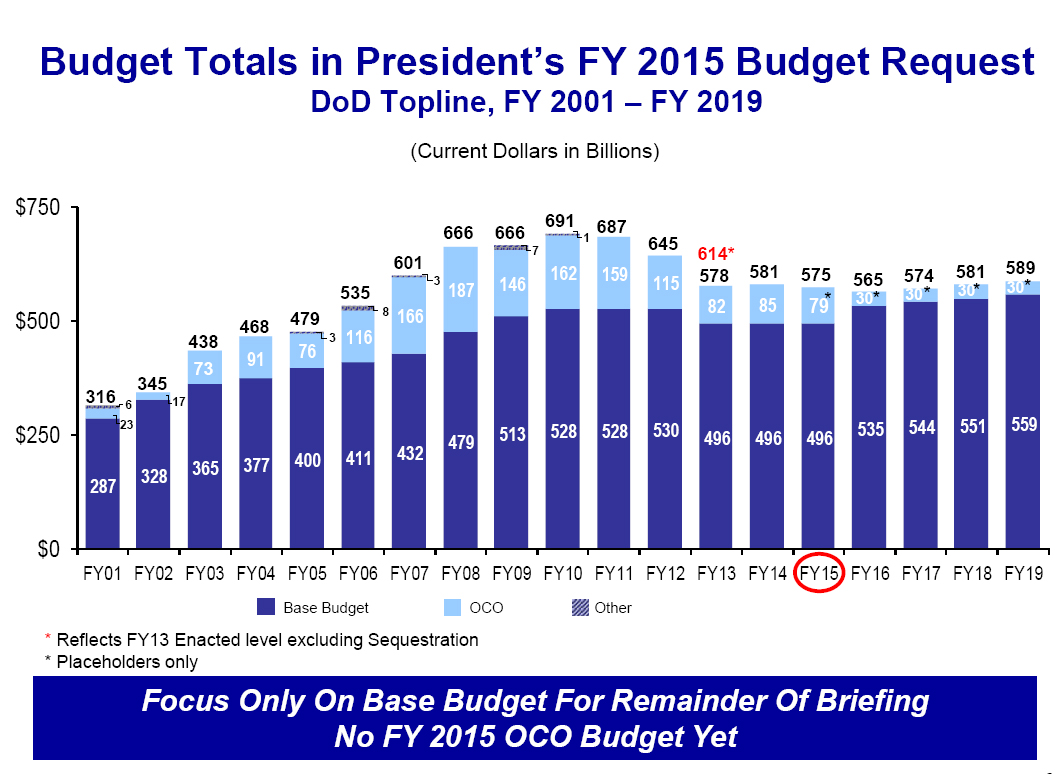 Approximately two-thirds of the requested budget ($336.3 billion) pays for the Pentagon’s day-to-day operations, including pay and benefits for 1.3 million active military personnel, 800,000 Reserve and Guard personnel, 700,000 civilian personnel, as well as health care benefits for more than 9 million beneficiaries, both active and retired.

The FY 2015 budget plans to save nearly $94 billion over the next five years through the following efficiency initiatives:

The Pentagon also plans to slow the rate of increase for pay and benefits (such as health care and basic allowance for housing), but does not plan to cut salaries for those in uniform. 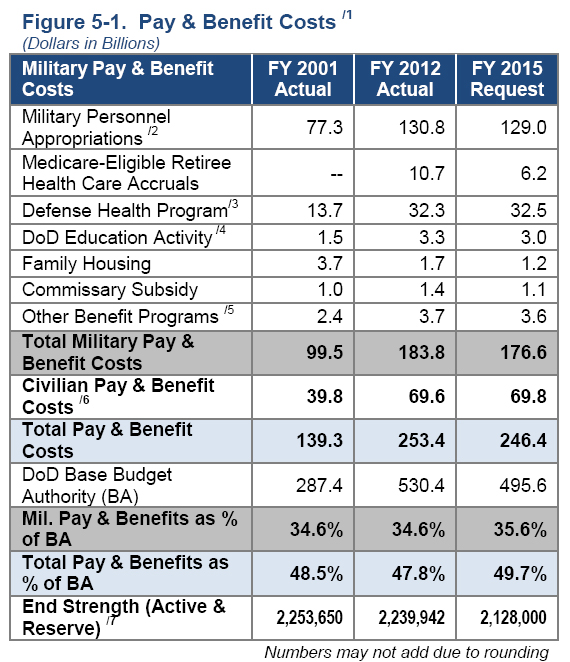 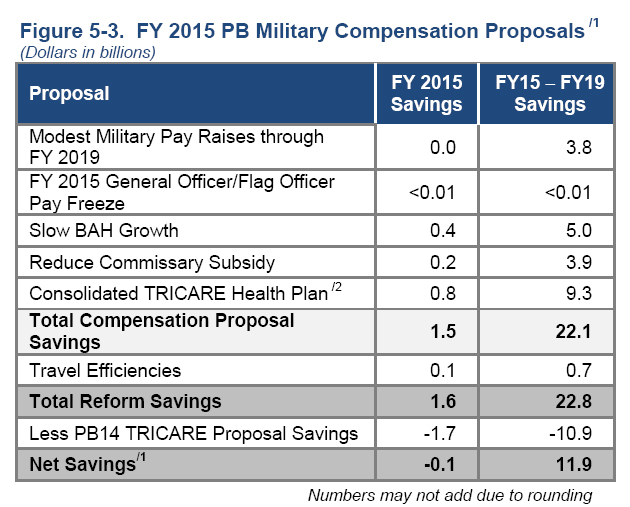 The remaining third of the overall budget ($159.3 billion) pays for investments in future defense needs, including modernization and recapitalization of equipment and facilities. The budget includes $90.4 billion for procurement, $63.5 billion for research and development, and $5.4 billion for military construction.

The following personnel reductions are planned as part of the FY 2015 budget proposal, and assume additional sequestration cuts will not be required. Should sequestration continue, personnel levels in the Army and Marine Corps will fall even further.

The Pentagon’s modernization plans in the FY 2015 budget include $5.1 billion for cyberspace operations and training. It also provide $45.8 billion for major advanced weapon systems, including 34 Joint Strike Fighters, seven warships, eight anti-submarine aircraft, ballistic missile defense systems, a long-range strike bomber and a new ballistic missile submarine, as well as an investment in helicopters and the next generation of jet engine technology.

The Air Force would reduce the number of aircraft from 5,194 to 4,814 by FY 2019. This effort will involve retiring the entire fleet of A-10 close air combat support aircraft, and the Cold War-era U-2 spy plane.

The Air Force will also continue to purchase more Reaper unmanned aerial vehicles until the older Predator systems are completely replaced. But the number of combat air patrols will be reduced, from the current capability of 65 around-the-clock patrols to 55 CAPs in FY 2019.

The Navy will increase the number of from its current level of 288 to 309 by FY 2019. However, 11 cruisers will be laid-up in long-term modernization. These ships will be placed in reduced operating status while they are modernized.

The Army will reduce the number of soldiers to between 440,000 and 450,000, and could go as low as 420,000 if sequestration level cuts are required. The Army will see increased investments for 56 new helicopters. The Army’s Ground Combat Vehicle program has been terminated and alternative options are being evaluated.

The Marine Corps will drop to 182,700 Marines, but will see finding for an additional 900 Marine Security Guards for embassy duty around the world.

The budget provides a 10 percent funding boost for U.S. Special Operations Command, bringing it to $7.7 billion and 69,700 personnel. 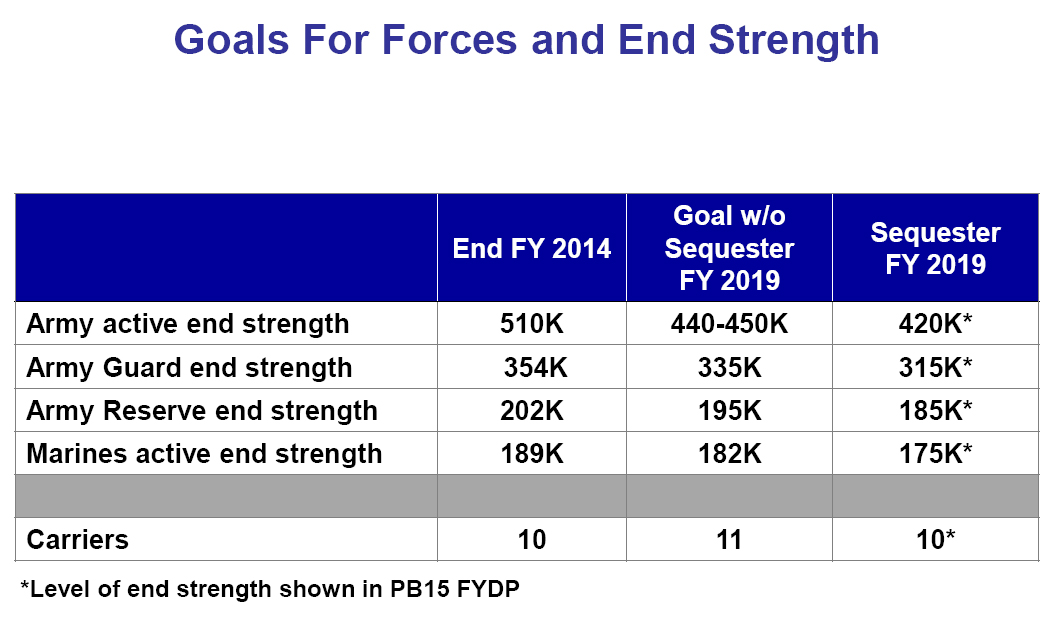 The Navy would need to eliminate one aircraft carrier starting in 2016.

Air Force flying hours would also be reduced, and new F-35 purchases would be cut.

The Marines would shrink to 175,000 active-duty personnel.

The fiscal year 2015 DOD budget proposal also includes a separate funding mechanism called the Opportunity, Growth and Security Initiative, which would provide the Pentagon funding levels above sequestration. The $26.4 billion OGS Initiative would be split evenly between defense and non-defense funding, and would be used to increase training and readiness, and increase the pace of modernization efforts for key weapons systems.

However, the Pentagon is not scheduled to deliver a detailed line item list of how it plans to spend the money until the week of March 10.

Lawmakers call for a...