It’s no secret the federal government has a voracious appetite for security clearances. But what many probably don’t know is that even if your dream is to prepare and serve lunch to those hard-working analysts at the CIA, NSA or Defense Intelligence Agency, you’re still going to have to pack a top-secret security clearance with cleared access to sensitive compartmented information. 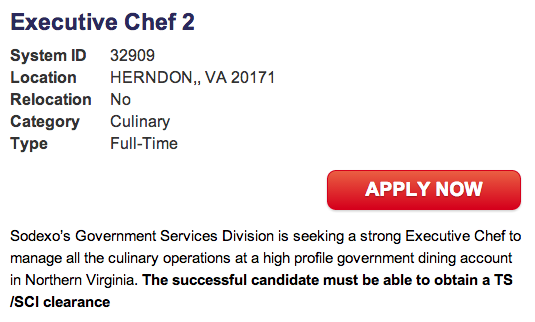 In this recent job ad posted by Sodexo, the food services company is looking for an executive chef with a top-secret security clearance.

A recent job posting by international food services company Sodexo, based in Gaithersburg, Maryland, said the company’s Government Services Division is looking for an executive chef to “manage all the culinary operations at a high profile government dining account in Northern Virginia.” The right candidate needs to have a “passion for quality food, taste, presentation, menu development” and at least 10 years of experience in an executive chef role. Oh, and he or she will also need a government-issued top-secret security clearance.

Steven Aftergood, the director of the Project on Government Secrecy at the Federation of American Scientists, told FedScoop it is not particularly surprising to see this company — which manages food service at CIA headquarters in Langley, Virginia — require such high level security clearances for those working on contracts with U.S. intelligence agencies. In this particular case, the employees may very well be working in an under cover status. “So their names, their faces and simply their presence at the facility could be considered secret, even if they do not communicate any classified information,” Aftergood said.

As of October 2013, the number of people eligible for access to classified information had ballooned to 5.1 million, including more than 1.5 million with top-secret clearances. According to an Office of the Director of National Intelligence report, only 60 percent of those people had access to classified information, suggesting that vastly more clearances are being requested and granted than are actually required, Aftergood wrote.

In a February report to the president on the current status of the government security clearance process, the Office of Management and Budget warned the growth in the number of security clearance investigations has not only outstripped the government’s ability to keep up but has also cost taxpayers billions of dollars and may, in the end, be putting classified information at greater risk of being exposed.

“[The] growth in the number of clearance-holders increases costs and exposes classified national security information, often at very sensitive levels, to an increasingly large population,” the OMB report states.

“A larger number of clearances is harder to manage and maintain, and more prone to human error, than a smaller, more streamlined cleared population,” Aftergood said. “It’s also more expensive. So yes, non-essential clearances should be avoided in the interest of preserving the integrity and efficacy of the personnel security system.”

Source: Office of Management and Budget