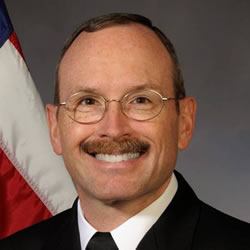 Rear Adm. Sean Filipowski will be assigned as the director of intelligence for the U.S. Cyber Command, the Navy announced on Monday.

Filipowski currently services as the deputy director of operations at the U.S. Cyber Command.

Secretary of the Navy Ray Mabus and Chief of Naval Operations Adm. Jonathan Greenert announced the other flag officer assignments:

Rear Adm. Filipowski, a native of New Jersey, graduated and was commissioned in 1982 from the University of Nebraska-Lincoln. He subsequently graduated from the Naval War College in 1994.

Shore assignments have included U.S. Naval Security Group Activity Misawa, Japan as a division officer, assistant department head, and as the executive officer; the National Security Agency; the Naval Network Warfare Command; and, as the Director for Electronic and Cyber Warfare on the OPNAV Information Dominance Staff.

He is currently serving as the Deputy Director of Operations at U.S. Cyber Command.