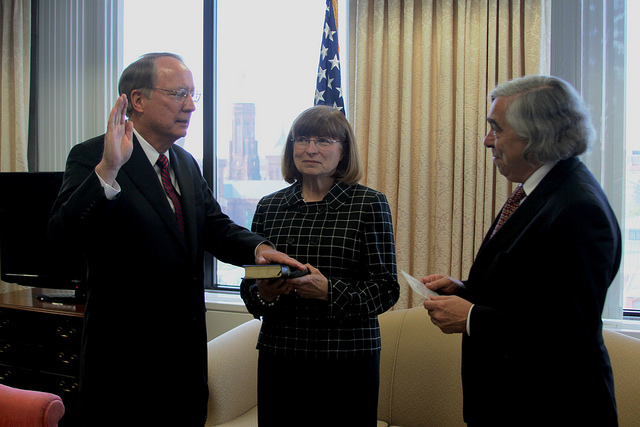 Frank Klotz gets sworn in as the new NNSA administrator. (Photo: NNSA Flickr)

The National Nuclear Security Administration has a new leader.

Lt. Gen. Frank Klotz was sworn in late last week as the new administrator of NNSA and as the Energy Department undersecretary for nuclear security.

At NNSA, Klotz will be responsible for operation and management as well as handling all policy-related issues for NNSA and the Energy Department, to align with President Barack Obama’s national security agenda.

“NNSA and the entire nuclear security enterprise are at the very center of all of these national security objectives,” Klotz said. “Moreover, the unique talents and skills we bring to each aspect of our mission enable success in all the others. What everyone in the enterprise does—regardless of organization, job, rank or seniority—is vitally important.”

“With his years of service to our country, his vision for NNSA’s nuclear security programs, and his dedication to supporting the men and women of the organization, I am confident Gen. Klotz will bring strong leadership and management to this critical Department of Energy mission,” Energy Secretary Ernest Moniz said.

Klotz met with senior NNSA staff, interagency partners, directors of NNSA’s three national laboratories and director of the Nevada National Security Site. He will visit all NNSA sites in the coming weeks, according to a DOE release.