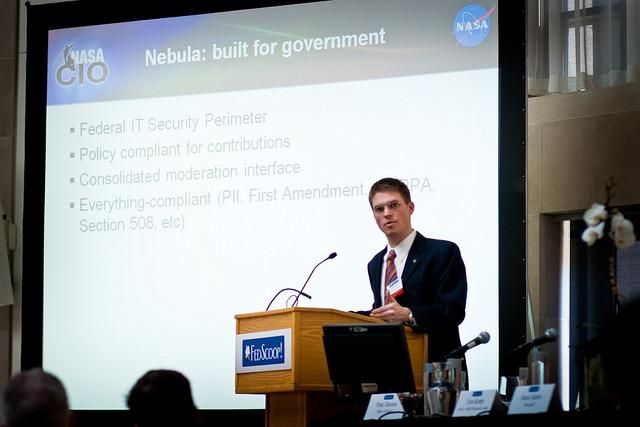 NASA’s Ames Research Center sits in the heart of Silicon Valley, home to the world’s most influential technology companies and starry-eyed entrepreneurs, toiling away in garages and basements hoping to build the next new thing.

Ames itself has served as an entrepreneurial incubator for a number of tech luminaries, including Bloom Energy’s K. R. Sridhar, Oracle’s Larry Ellison and Excite@Home’s Milo Medin, who now leads Google’s fiber initiative as Vice President of Access Services, to name just a few.

“There’s a long history of entrepreneurs that have left and been inspired to go and take the work they’ve done and benefit folks outside of the federal sector, outside of the NASA walls,” says former NASA IT Chief Technology Officer Chris Kemp.

Inspired by that culture of tech innovation, he hopes to add his name to that list. Kemp, who left NASA in March of this year, launched Nebula, Inc. in late July, a new entrepreneurial venture aimed at “democratizing cloud computing” through open source software and hardware. The venture is funded by Kleiner Perkins Caufield & Byers and Highland Capital Partners.

Kemp began his public service career at NASA in June 2006 as a business development director. In November 2007, he was appointed Ames chief information officer and became NASA CTO of IT in April 2010.

During that time, he served on the Federal Cloud Computing Standards Working Group and led the founding of NASA’s Nebula Cloud Computing Platform. The project, started in October 2008, has cost $13.6 million to date according to the IT Dashboard and is still a priority for NASA, which recently released a white paper highlighting its successes.

“When I was CIO of Ames Research Center, I pulled together a small, scrappy group of civil servants and contractors and came up with the strategy and got the White House excited about it. Got the thing launched, and I came up with the name Nebula, and I made sure the project had some momentum, and I think the success of that project was very beneficial to NASA. It allowed us to internally appreciate the opportunity that cloud provided,” he said.

Over time though, Kemp had ideas beyond the walls of NASA’s universe. In a blog post announcing his resignation as CTO, he hinted at its constraints:

“Whereas I thought I had the best of both worlds being a Headquarters employee stationed in Silicon Valley, I actually had the worst of both worlds… no influence when I can’t be in all of those meetings at NASA HQ, with no mandate to manage projects at Ames. As budgets kept getting cut and continuing resolutions from Congress continued to make funding unavailable, I saw my vision for the future slowly slip further from my grasp.”

And with that, he made the leap to the private sector “to find a garage in Palo Alto to do what I love.” These days he’s settling for the basement of Kleiner Perkins headquarters, where Nebula, Inc. resides, along with a second office in Seattle, Washington.

“The aha moment was when I started to realize the potential of the technology was. When I was at NASA we had over $2 billion we were spending a year on IT, and I looked across the entire agency when I was CTO, and I saw hundreds of organizations spending millions of dollars on data centers and infrastructure. This whole notion of a shared computing resource within NASA made a lot of sense. I started thinking about how this technology might benefit companies across the world.”

“It’s a turnkey private cloud. What the appliance does is it automates all the challenging parts of building a private cloud,” said Kemp.

Kemp acknowledges his work at NASA Nebula is the inspiration for the name of his new venture, but insists there’s no potential for confusion between it and NASA Nebula. While Nebula Inc. and NASA Nebula are both cloud computing initiatives, the differentiation is in Nebula Inc.’s appliance and its integration of open source software and hardware.

However, his use of the term ‘Nebula’ has raised red flags. According to a NASA public affairs, NASA’s Office of General Counsel filed a trademark application on the ‘Nebula’ name on July 27 when it learned of the Nebula, Inc. announcement.

While NASA supports “commercialization of NASA technology,” NASA Acting IT CTO Tsengdar Lee said, “There’s a lot of discussion in the building. People supporting it, people against it. There’s confusion, but we generally don’t comment on private ventures. He has all the right to do the things he wants to do, and our interest is to protect our intellectual property, and also to make sure our mission and our work gets done. We just wanted to protect what we are doing.”

“I’m a big fan of anyone who leaves government and works to commercialize and bring value to the American public out of government technology,” said Kemp.

Through NASA’s collaboration with Rackspace on the OpenStack Compute project, he praises its role in establishing an entrepreneurial foundation for emerging technology ventures such as his and cites NASA’s open government leadership, as stated in its open government plan, as a source of inspiration:

“The benefits of allowing the public to assist in development of NASA software include increased software quality, accelerated software development, and a higher rate of technology transfer both to and from NASA.”

This correlates with the NASA Open Source Agreement, an open source initiative approved license to allow public release of NASA-funded software, under which 60 software projects have been released. In that spirit, Kemp says Nebula Inc.’s investment in Open Stack contributions will support other ventures, including NASA’s.

“What’s happening is, with over a thousand developers contributing code to Open Stack, that’s code that won’t be written by taxpayers, at taxpayers expense, that NASA will directly benefit from,” he said. “A lot of people leave government and use their relationships to benefit themselves. I’m leaving government, and I’m bringing a bunch of private money in that will actually help NASA.”

“We’re feeling really proud of the heritage of the project. We’re a bunch of space geeks and the fact that this came out of NASA, the source code that was open sourced is not only the basis of our product but dozens of products which are being developed.”

Nebula, Inc.’s Nebula Enterprise Cloud Appliance will begin a pilot phase this fall, and it will begin taking orders in the first quarter of 2012. A requisite for any successful start-up founder, Kemp is optimistic and idealistic his idea will change the world.

His focus is the cloud, but he’s shooting for the stars.

by Dave Nyczepir • 24 hours ago
Tech