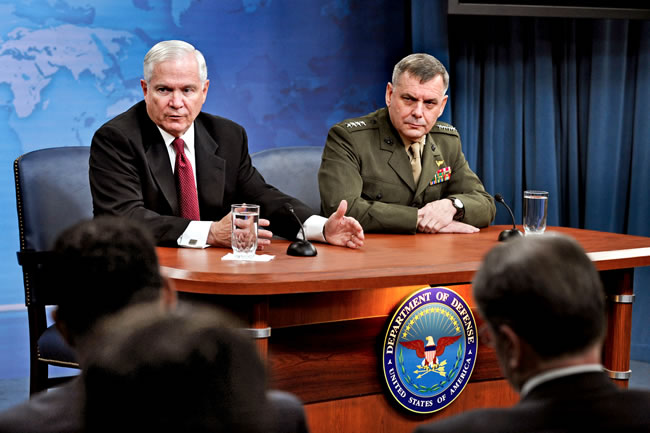 The continuing cuts to the Department of Defense budget won’t come without a well-thought out analysis of the consequences the cuts will bring, Secretary Robert Gates said last Thursday.

“The worst of all possible worlds, in my view, is to give the entire Department of Defense a haircut that basically says ‘Everybody is going to cut ‘x’ percent,’” Gates told reporters today during a Pentagon news briefing. “That is the way we got the ‘hollow’ military in the 1970s and the 1990s.”

So what now? For one, Gates said he’ll soon be doing a comprehensive review of DoD spending even though he doesn’t know how much of the $400 billion President Obama wants to cut from national security spending between now and 2023. That could come with Quadrennial Defense Review and to consider the implications of scaling back or eliminating specific missions.

His goal will be a review “where it is about risk management with respect to future national security threats and challenges as well as missions that our elected officials decide we should not have to perform or can’t perform any more because we don’t have the resources.”

The Secretary continued, “We have some investments we have to make,” the secretary said. “We have to buy the new [Air Force refueling] tanker. We have to replace some of the surface ships …built during the Reagan years that will age out over that 12-year period…All elements of the [nuclear] Triad need to be modernized” — bomber aircraft, land-based missiles and ballistic-missile submarines…You may have to make some choices there. I want to frame this so it is not a math exercise, but so people understand the strategic and national security consequences of the decisions that they are making.”

by Billy Mitchell • 17 hours ago
Acquisition