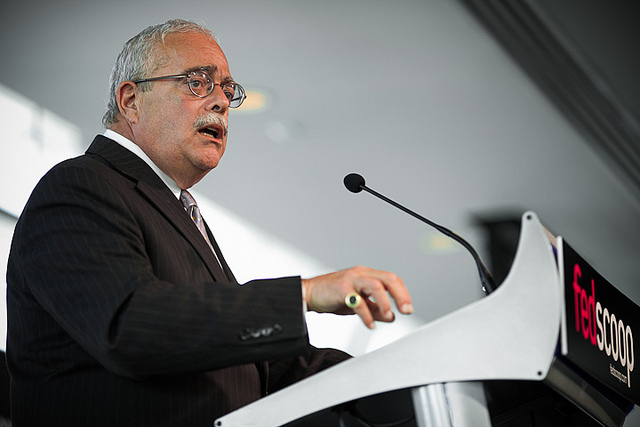 Anyone who says Congress is idle has never met Gerry Connolly. It is past regular business hours, and the Virginia congressman has just wrapped a meeting with a former federal chief technology officer. Connolly has barely 30 minutes to spare before he is off to vote on a slate of issues — and then the evening continues with other work-related obligations long after the sun sets in Washington.

Granted, Connolly has had some time to get used to his schedule. He is currently serving his third term in the House, representing Virginia’s 11th District — one of the most booming tech sectors in Northern Virginia. His committee assignments include serving as ranking member of the House Subcommittee on Government Operations, which covers issues pertaining to NoVa’s workforce and economy.

Having a constituency with a vested interest in federal IT has its perks as Connolly works to push through technology legislation. “My district is very aware of the potential for cloud computing and the need to move to the cloud, and therefore data center consolidation, which might be an arcane issue for other districts,” he said.

Given sequestration and rolling furloughs, the idea that IT investments could offset deep cuts “is very much in people’s minds,” the congressman added.

While bipartisanship is often elusive in Washington, Connolly has pushed through with a bill to bolster the accountability and transparency of federal IT programs. Working with Rep. Darrell Issa (R-Calif.), who chairs the House Oversight and Government Reform Committee, the eventual bill — the Federal Information Technology Acquisition Reform Act, or FITARA — represents a rare case of successful across-the-aisle collaboration.

To move a bill, Connolly said, a member of Congress typically has to persuade his or her colleagues it is necessary and it needs to be addressed. FITARA did not require much convincing — it was the first major rewrite for federal IT acquisition management in 20 years.

“There was a consensus especially in the realm of technology that 20 years in an eternity,” Connolly said. “No one could argue we were rushing into things.”

The process was open, with a draft filed in October before the bill was formally introduced in February with Issa. The House adopted the legislation June 14.

“That’s a long time for … people to have input if they wanted it, both industry and colleagues,” Connolly said. “So I think the process worked really well.”

Although no panacea, FITARA could be the lynchpin in a larger effort to fix federal IT. The Government Accountability Office in July found despite spending $600 billion on IT over the past decade, the federal government is far from seeing the same productivity improvements the private sector did with IT.

Examining specific IT projects, GAO found 154 investments worth $10.4 billion that were at high risk for falling behind schedule or running over budget.

Turning around federal IT requires a multipronged approach, which Connolly acknowledged. In addition to better recruitment and retention of highly skilled IT managers, “you need a different hierarchy that invests in a chief information officer per federal agency to replace the sort of plethora known as CIOs throughout federal agencies,” Connolly said.

FITARA would do just that, installing one CIO in each department — a drastic departure from today’s 250-plus CIOs across the 26 largest federal agencies. Very few CIOs currently have complete control over the IT budget or even the authority to effectively manage IT investments, according to Connolly.  “And that means no one is in charge of accountability and decision-making authority,” he added.

Over the next months, FITARA will remain a close focus, alongside Connolly’s other priorities.

“Right now, I’m working on postal reform, and I’m also working on foreign aid reform, trying to — ” A loud sound cuts off Connolly mid-sentence. “Is that the vote?”

“Really?” Connolly says, flummoxed. “And then what happens?”

“And then we continue debating,” Rhodeside says.

“And then I’m going down to the history caucus, right? It’s in…?”

The history caucus meeting is the second get together for the Narrative History Caucus, co-founded by Connolly. “We have our second meeting tonight with an author,” he explains.

He proceeds to run through the litany of work he is tackling next. Tougher sanctions for foreign cyber-attackers who systematically target the U.S. A data breach bill that would require the Office of Management and Budget to implement notification plans and requirements for federal agencies. A renewed focus on data center consolidation — “which has actually lost ground,” Connolly said.

And then there is the Federal Risk and Authorization Management Program process, the government’s policy approach to creating trusted relationships between agencies and cloud service providers. It is chugging along, albeit slower than expected, to Connolly’s dismay. Just a handful companies have been approved as federal cloud services providers since FedRAMP launched in June 2012.

“Only six,” he said. “Can we do better than that? In moving significant things to the cloud, progress has really been slow.”

Open data, however, has received more attention. The White House’s open data policy, unveiled in May, aims to make open and machine-readable data the default, with the ambition to spur innovation and economic growth.

It is an area, Connolly said, that is rife with opportunities for entrepreneurs and innovators to achieve great commercial success. Unleashed weather, health, GPS and demographics data has pushed forward innovation and revolutionized how we make sense of the information deluge.

But those areas are only the beginning.

“I think open data has limitless possibilities in almost every commercial sphere; it really is a matter of imagination,” Connolly said.