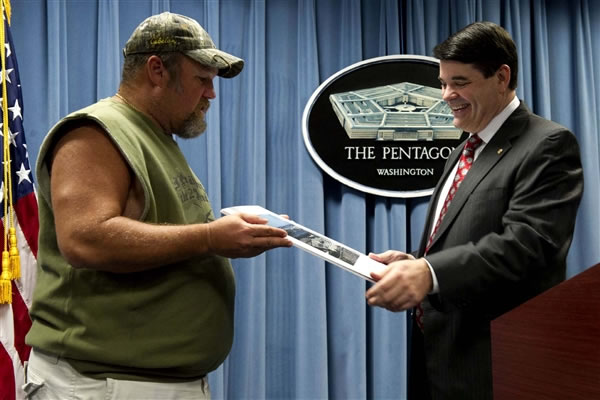 Comedian Larry the Cable Guy was at the Pentagon last week to shoot a segment for the History Channel’s show, “Only in America.”

Larry, whose real name is Daniel Lawrence Whitney, said his segment was to show views the inside workings of the Pentagon.

“It shows you how your tax dollars are being spent, and it makes you real proud,” he added. “A lot of people don’t know what they do here, and 24,000 people work here, and they’re all regular Americans just like you and me.”

The “Only in America” segment was taped as part of the show’s second season and will begin airing in January.

And, yes, Larry did drop his “Git-R-Done!” catchphrase for American troops.

“This is Larry the Cable Guy, and you’re gittin’ ‘er done watchin’ the Pentagon Channel,” he said. “And if you’re not, you’re a dag-gum communist!”